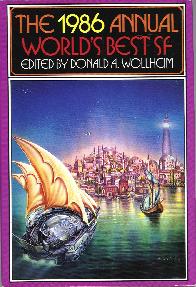 Lucius Shepard. The Jaguar Hunter.
Originally in : The Magazine of Fantasy and Science Fiction, May 1985

Harlan Ellison. With virgil Oddum at the East Pole.
Originally in : Media

Connie Willis. The Curse of Kings.
Originally in : Asimovs, March 1985