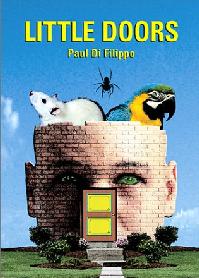 One of the more prolific, and in my opinion, the most inventive of short SF writers of the current era, has had several collections of his short fiction output published to date. I read and reviewed ‘Babylon Sisters’ a while back, and this collection was published in the same year, 2002. Let’s have a trot through the stories in the order in which they appear, as is my wont.

Shades of Lewis Carroll, in which an academic with a young student on the side (and on top, and doubtless, knowing Di Filippo’s penchant for naughtiness, reverse cowgirl by golly) are offered a means to escape their lives. The author, is struggling with his latest academic work, an analysis of the works of E Nesbit and L Frank Baum, and Di Filippo gets right into the mind of the dry, pompous academic who lusts after, and looks down on, his lover (“queen of the (photo)copiers, Zenobia of the Xerox Shop”).

The academic endeavour is thrown into further turmoil by the discover of an previously unknown piece of children’s literature, and, in a story within a story, Princess Ordinary bemoans her fate.

The young girlfriend finally takes a leap into the rabbit-hole, metaphorically drinking the potion that will enable her to go through the Little Door, and, like Dorothy opening the black and white door of her transported house to find (‘Oh My’) that the other side isn’t Kansas any more Toto. But the academic is unable to make the trip.

The academic, a rather creepy Crawleigh, is delightfully realised, from the start in which he ponders the elements of the phrase ‘Once Upon a Time’, and Di Filippo gives a loose rein (not quite a full rein) to his mastery of the English language.

You would think that being born without a brain would be a bit of a hindrance, wouldn’t you? But not in America – the land of opportunity. The eponymous Billy is helped by his vacant branial cavity being colonised by a spider, a mouse and a parrot (hence the Pythonesque cover), who between them are able to enable the body they control to rise to the giddy heights of President of the U S of A. The biting satire is slightly lessened by the fact that fifteen years on the real President appears to have half a brain.

Having gotten into the head of an academic in the first story, and into that of a President (albeit through a parrot/mouse/spider proxy), here we are very scarily taken behind the eyes of Andy, who is a no-account piece of white trash. Now this wouldn’t normally be a problem, but unfortunately Andy has some long-standing psychiatric problems, and when the furnace he works in the steel mill starts talking to him, things are gonna happen. The voice from the furnace is Moloch, an ancient Hebrew name for the god in whose name children were sacrificed. We follow Andy’s descent into madness and the gruelling final scene in which Andy takes his young children to the steel mill will stay in the memory for quite some time.

A young couple move to the country, and find the country air does wonders for them. Young Lucy in particular embraces the good life, the very soil on which they (ahem) live/lurve, and she finds that ‘The Grange’, a long-standing rural farming co-operative, has a need to find a new Earth Mother. Husband Edward fears what fate has in store for him (think Wicker Man), and if you are familiar with the folk song ‘John Barleycorn Must Die’, it mention in the text brings an added frisson.

Sleep is Where You Find It. (with Marc Laidlaw.) Originally in Fantasy & Science Fiction (1993).

The dark streets of downtown New York are all the life that Weegee knows (literally, for he is a man of his time but of no past time). He is a photographer – not a fashion photographer, nor a paparazzi, not for him weddings, engagements, bar mitzvahs. For he is a scene of crime photographer. And he is haunted by those who he has frozen forever in the flash of his camera – haunted by those victims of murder, rape and sudden death, as they appear in the back of his car on a regular basis.

The dark nights, wet roads, dazzling headlights leap out of the page at you, as you are disorientatingly careered through a night, and through Weegee’s past, as he has to face a serial murderer with a penchant for decapitation before his night is over.

Horror writer Stefan Prinze (Stefan=Stephen Prinze=King) is somewhat paranoid. Spending too much time writing horror is causing him to see vampires and axe-wielding murderers at every turn. In a short piece, Di Filippo gets some mileage out of the humour of the world through his eyes – my favourite being the bloated corpse in the bath (as in The Shining) coming to life, not to put a clammy hand on his shoulder (I actually jumped when reading that bit in King’s version) but to shout ‘Jesus Christ! Stefan, you asshole! You scared the shit out of me!”

My Two Best Friends. Originally in The Perfect Moon (1996).

A young guy finds out that when the moon is full his best friend turns into a …. woman. Duh? Yup, a were-woman. What a bummer. And what would the odds be on finding his best girl suffers from a similar monthly disturbance, only in the other direction. A bit of a one trick pony story.

The Death of Salvador Dali. Originally in The Edge (1996).

You wouldn’t expect one of the last century’s greatest surrealists to pass away like the rest of us would you? No, his afterlife is not to be spent in a land of milk and honey, but in a surreal landscape the like of which he became famous for.

What would you put up with for your dream house? Would you turn a blind eye to the neighbourhood? Or the neighbours? How about the prehistoric couple in the basement? Or the spaceage minimalist who are the sitting tenants on the top floor. A young couple are willing to allow the strange couples to share their house with them, and actually get on quite well with them, all things considered.

Jack Neck and the Worrybird. Orignally in Science Fiction Age (1998).

Di Filippo gives full rein to his imagination, leaving no word unturned in an attempt to enrich the telling of the story. A quite bodacious bit of world-building, written as if by a bastard offspring of a coupling between Dr Seuss and Roald Dahl, although evidently inspired by the paintings of one Chris Mars (presumably this one). The writing will be either too over the top for you, or else, like me, you will revel in it.

Di Filippo ponders whether there may be some immortal souls whose longevity is ensured by sucking not the blood frim the living, but their happiness. Having witnessed a party and a wedding reception die a death, a young man tracks down and despatches, Van Helsing style, those succubi in question.

Signing Each to Each. Originally in Interzone (2000).

You can pretty much feel the salty sea air of the New England coast as we follow one man who has been obsessing over the mermaid on an old postcard he picked up a while back. Knowing that the beauteous maiden in the photograph must now be somewhat more advanced in years, he hopes beyond hope to find the fish-tailed girls in the photograph when he finally traces her. Sadly the years have not been kind to her, and her amorous advanced cause him to flee. Unfortunately he flees to far, ending up in the sea, but fortunately she has not lost her siren call, and he is carried to shore by those very creatures of which he has been dreaming.

An antiquarian book seller and collector stumbles across a veritable Aladdin’s Cave – a school library which is stocked with first editions of all the classics published over the past 100 years. A sequence of school librarians have evidently shown astuteness in their acquisitions policies, and the only problem for him is whether to buy them for a song or to do the honest thing.

Return to Cockaigne. Originally in Interzone (2001).

Di Filippo follows a story convention used regularly by Stephen King – telling a tale which incorporates sequential back story flashbacks. And with echoes of ‘The Talisman’ he posits an alternate world in which our travellers become might-thewed heroes in days of yore. However, our heroes include one who is greedy in his desire for the power which he has in Cockaigne, and the method of their travelling, taking drugs soaked into blotting paper, suggests an extended riff on the never never land to which cocaine can take us.

When I reviewed this in its original magazine appearance I wrote

The bookish Dottle finds his path from quiet middle age to the end of his life takes a rather strange, and shorter, turn when he meets an attractive young woman. His naivety prevents him from seeing that she is a gold-digger, and unfortunately for him, she is an impatient gold-digger, and hastens his end with a gardening ax. The tree against which he has been so rudely despatched takes up his soul upon his death, and Dottle rather comes to like his quieter, albeit less mobile existence. But his widow has further plans, and his garden has real estate opportunities, and so the tree must go. Dottle’s immortal soul remains with the tree and as it is reduced to smaller pieces of lumber, he finally ends up in an offcut which is turned into a pipe.

A touching story of a 100-year old man living out his final years looking back on a life which has been as nothing compared to the halcyon days of his boyhood when he was transported at night to a fantastical dreamland of enchanting magic. But those days of childhood are long gone, and as his old ticker begins to tock less and less he is resigned to checking out at a very mundane plane of existence. Except that in his dying throes the Peter Pan like creature who was his travelling partner in those dream journeys of yore returns, to take his hand once more and to lead him away…

A poem which takes as a starting point T S Eliot’s ‘Old Possum’s Book of Practical Cats’ and Dr Seuss’s ‘The Cat in the Hat’. A feline tale of a feline tail – namely a young woman named Mehitabel of catlike tendencies, who finds herself with Old Nick himself, and gives him a hell of a time. She is reincarnated, as a succubi cat, to wreak hell in the alleyways of the night.

An excellent collection, showcasing Di Filippo’s many talents. Even the weaker stories are brought to life by characterisation and description of a standard that others in the genre can only dream of.