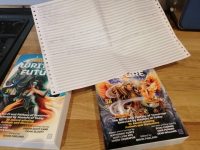 I do get a steady drip-drip of email requests to review items on Best SF. Frustratingly, they’re invariably unpublished authors with a horror/splatterpunk/crime/fantasy novel to promote, who haven’t taken a moment to check the focus of this website. A few days ago I did get a nice, personalised request to see if I would be interested in reviewing a copy of this anthology (and Vol 37 as well), and I replied in the affirmative. And I was rewarded by receiving two volumes in quick order, with a despatch note that came out of a dot matrix printer! I haven’t seen one of those green and white wide, perforated, thin sheets of paper for a couple of decades. It really warmed the cockles of this stony old heart. Those of you of a younger persuasion should ask your parents about dot matrix printers.

I’ve only read one of the previous volumes in the past. It was Volume 23, back in 2007, and I enjoyed it – you can read the review here. The obvious think about the 2007 volume is of course to see just how successful their crystal ball gazing has been in subsequent years. I did point out in the review that Aliette de Bodard and Jeff Carlson had already started appearing in the professional magazines, and other than that I picked out Stephen Gaskell, Jeff Bunker and Edward Sevcik as my picks. Well of those 5 names, AdeB and Jeff Bunker have done well, but of the other three, and the other 8 in the volume, relatively little has been heard.

So let us see what Volume 36 brings us shall we. As is my wont, I’ll put this page up straight away and insert reviews into this page as I read the stories.

First thing to mention is that it’s a hefty trade paperback format. Second thing is that it has a nubile, scantily dressed young woman on the cover, which is the kind of thing I prefer not to see on SF&F books. The series has previously had Frazetta paintings on the cover. Now, I liked Frank Frazette paintings in the 1970s, but in my defense I was in my teens then, and it was the 1970s. For the 2020s I’d like to see non-nubile young women on the covers of SF&F books and magazines.

Long-standing editor and WotF member David Farland provides a short introduction, notably mentioning the fact that stories are judged blind, and that finalists are paid and given other support. And notes on how he judges stories.

Echo Chernik, a well-established illustrator, provides a short introduction to the illustrations in the volume, which include a series of full-colour plates after her introduction, and black and white artwork throughout, which is something so rare in books these days. Turns out she’s the cover artist, and ‘Uncertain Egg’ is ‘a piece about undiscovered potential … about hopes, dreams and the unknown … about being supported and encouraged … and given the wings to fly’. Who’da thunk it?? Personally, I’d put in a requirement for judging illustrations for this series : wispy material or similar, handily covering up otherwise naked or semi-naked breasts = grounds for immediate exclusion. But I spose some analysis has been done and presumably This Kind of Thing is seen as helping, not hindering sales?

Now to the fiction.

Chris Winspear is a young Australian writer, and he opens up the volume with a good story, well-handled. The crew of the International Space Station have an unexpected visitor, a galactic trader who is more than pleased to have made First Contact with us. He is able to offer the crew a wealth of technology to help us with the many problems we are facing on Earth, but with a catch. He needs them to sign a deal straight away, and the payment for the goodies he has? One of our most abundant resources. People. It’s a story that could easily have appeared in Analog/Asimovs throughout the time I was reading them. [21st January 2022]