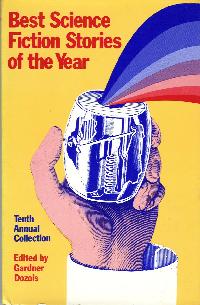 A female psychologist is fascinated by a client who claims to be a vampire. We follow her deep into the dynamics of her attempted therapeutic interventions and her growing emotional attachment. She finds out that he is indeed a vampire, albeit not a be-caped and be-fanged vampire, who preys on the low-life on the mean streets. We get deep into the mind of the long-living vampire to a degree rarely seen outside of psychology manuals. Wish I’d known though that the vampire had appeared in ‘The Ancient Mind at Work’ (Omni, 1979) the previous year, as I would have read that first! Winner of the Best Novella Award