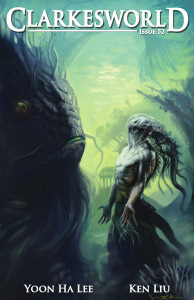 After a very successful 2010, this is Clarkesworld Magazine’s ‘first story for 2001 and it is online here.

It’s a lovingly crafted story, an intriguing constrast with the action of the story – full-blooded mayhem on a large, if impersonal scale. The plot summary does no justice : a young soldier flees her ravaged homeworld on an alien war vessel, wreaking revenge on a colossal scale, until she in confronted by what she has become.

What marks the story out is the subtle crafting of the main character, the intriguing ‘ghost’ that accompanies her, the backstory and the politics, and the effort that Yoon Ha Lee has put in throughout – the alien vessel’s control room comes across as alien, with tapestries and control systems quite unique. It’s an excellent story of shadows, origami folding weapons and vessels, smoke and hidden and unknown identities, desires but also duties.