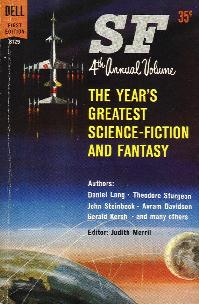 Carol Emshwiller. Pelt.
The POV character is the hunting dog of a human who is currently on an ice planet, hunting for hides to take back to Earth. When the human kills one tiger-striped beast, but finds it has signs of being of a higher intelligence, the trip turns sour.

J.F. Bone. Triggerman.
Cold War Paranoia! Deep in a bunker in the US of A, the senior officer in charge of the button which will dispense retribution to the Soviet Union, sees Washington DC levelled by an incoming strike. However, something is not quite right, and he resists demands for instant retaliation, and is exonorated when it transpires that it was a meteorite and not a missile which did the damage.

Robert Sheckley. The Prize of Peril.
From 1959 a story which looks at the future of tv game shows – Raeder is playing for high stakes : he has to stay alive for a week, with professional hitmen after him, ever move captured and beamed out on live.

Richard Gehman. Hickory, Dickory, Kerouac.
A 1950s piece which doesn’t really travel the 45 years well (a la Austin Powers from the 1960s)- a mouse which is so cool that it’s a hep cat, man. Probably best read with a goatee and a beret.

Rog Phillips. The Yellow Pill.
A neat little story. A psychiatrists has a visit from the cops from someone who has just committed a murder, but who is obviously insane. The man spins a tale which is unbelievable – those he killed were Venusian lizardmen, and he is one a spaceship, and it is the psychiatrist who is hallucinating. The psychiatrist is bemused, then increasingly worried as the evidence that the murderer may be right begins to mount.