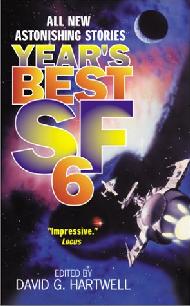 Tut-tut. I didn’t get my hands on this year’s Hartwell until November last year, and it has taken me until now to get round to reading it.

When reviewing Dozois’ 18th Annual Collection, which also included this story, I said:
“I have to admit not really enjoying this story. Set on a habitat carved out of an asteroid, we have a relatively bog-standard tale of political intrigue, and hi-tech : in this case biological descriptions of some complexity. A deep trench in the ocean of the asteroid is the cause of rivalry between two groups, one of which feels that there is evidence of spontaneous evolution to be found, the other of which evidently has some underlying reason to want the trench destroyed. A dramatic shoot out in the depths of the trench at the end of the story doesn’t quite work.”

One of a series of very short stories from Nature. For me the problem with stories such as this in non-genre magazines is that they can often take tropes which are familiar to us genre readers, and present a simple take. In this case post-humanity is in the form of an AI, whilst humanity itself has crawled into a shell of Virtual Reality, leaving the real world behind.

Not the millennium just gone, but the next one. DNA clones of Einstein, Hemingway and Picasso wreak a terrible revenge upon the 3rd millenium, in which the past is preserved in aspic (figuratively, not literally!).

Their violenct acts of destruction force humanity to reflect upon their introverted and backward looking nature.

Due provides a story in the form of a journal kept by a young boy who is being held in isolation. Through the successive entries we find out the reason for his isolation, and move towards a final entry in which the potential for true isolation is chillingly revealed.

Another short story from Nature.

Also in Dozois’ 18th, and there I said : “A quirky little tale in which near-autistic adult has the ‘gift’ of being able to trace rare houseplants which may end up providing magic bullet cures, but only whilst listening to ABBA music! But that’s about it!”

A satire on the current GM food debate and the fad in England for celebrity chefs. A young man woos his erstwhile girlfied with a view to proposing to her, at one of the finest restaurants in London. However, a police raid rather throws his plans awry.

Not one of Stableford’s best. (Betcha he didn’t try to submit it to Analog/F&SF!)

A Disneyesque fairytale theme park is disturbed when the troll from the Three Billy Goats Gruff abandons his programming and goes on a berserk wrecking spree, challening his fellow robots to rebel against the role they have in keeping the human population in their place.

Langford returns to his chilling BLIT concept. The Berryman Logical Imaging Technique enables fractal-based images to be produced which cause seizure or death in those who view them. The use of BLIT images by terrorist groups leaves society struggling to avoid these images.

Young children at school, whose darkened windows protect them from external threat, find a low-impact BLIT image and experiment with it.

Not quite as biting satire as you might expect. The methods to redress global warming have been successful. Too successful!

Clancy travels the galaxy, recording his First Contact planetary visits for the delectation of his avid book reading audience, very much in the style of BBC’s Michael Palin world tours- although one wonders whether so far in the future a vicarious public are likely to be so impressed with a purely written account.

Planetfall goes according to plan, and a race of fisherfolk offer some interesting content for Clancy’s latest ouevre, but nothing really gripping. Until, that is, a misunderstanding leads to a betrothal to one of the king’s (beautiful) daughters.

John M. Ford In the Days of the Comet.
Originally in : Nature

Another Nature story, reprinted in Asimovs, and reviewed thus by myself at the time: “A short conjecture on post-organic prion-based life”.

When reviewing this in Dozois 18th, I said: “Quality fantasy, as you might expect from UKLG! She creates a world in which godhood is passed down from generation to generation, to sibling couples. The rituals, ceremonies and relationships are lovingly described in engrossing detail, from the perspective of an elderly woman, once destined to be God Herself. The final throes of their belief system is described, as angels descend upon the community, which is tearing itself apart in internecine warfare. Worth a whole shelf of Quest Trilogy Fantasy.”

Again, I will proffer my original review:

“An interesting (at times fascinating, at times slighly long-winded) Alternate History(ies). Robert Stoney is imprisoned by the forces of the law, by reason of his homosexuality, a most criminal offence in the England of the inter-war years of the 20th century, tormented by the evil policeman Quint, who has the scientist imprisoned in a very small cage.

A mysterious visitor frees Stoney and …. well, as the story is online here – why not read it yourself?

Albeit at times a bit heavy on the descriptions of quantum physics, still an excellent and complex story which is even more rewarding once you spot where the links to real life people begin to surface.”

A short story in which a rebellious teenage daughter is seen as a long way from the cute little girl they used to know and love. The answer: thaw out another embryo…

A lot squeezed into one, deceptively simple story. Told through the eyes of a christian priest, who has been displaced, with the Earth, into a Dyson globe far, far distant. The alien race who are responsible for this are regular visitors to the spartan monastery in which he and a few novices continue to worship god. But is that God now a false god? Have they been deserted? How can faith survive in the face of such alieness?

Baxter has seen the future (and the past) through the eyes of woolly mammoths (the LongTusk books) and post-human penguins (‘Huddle’ from last year’s Hartwell).

Here humanity have well and truly f**ked things up, and in a desperate last chance a genmod squid is used to pilot a ship out to a mineral and water-rich asteroid, which is to be brought back to Earth. Against the odds the squid, Sheena 5, manages to succeed, but further to that, is able to raise fertilized eggs she brought on board with her. As the future generations of squid develop, they become truly sentient and what finally returns to earth is much more than was anticipated.

When I reviewed it on its original appearance in Interzone, I said : “The Fire Eggs appeared on Earth simultaneously, and have defied mankind’s attempts to study them in the decades since, with reaction to them varied. Glenn visits a couple of elderly relatives – his aunt, in the final stages of terminal illness, has taken to spending long hours communing with the iridiscent eggs on their front lawn. Schweitzer deals with the pain of loss and the struggle to understand the unknowable with sensitivity.”

A so-so short, harking back to a Guy de Maupassant story. Trapped in a snow-lodge, badly injured, a helpful alien is despatched by the injured party.

A short treatise on the nature of virtual reality, with many humans immersing themselves in the fictional historic past. Quelle fromage! (Or should that be quelle domage?)

An interesting take on human/alien relations. Humanity has managed, just, to defeat an invading alien race. On grandma’s farm one POW has been working for several years, and has developed a ..close.. relationship.

The strength of the bond he has to humanity and to grandma is tested.

According to Hartwell, this Nature short is “a piece of deadpan scientific humor with a submerged literary reference to the metaphysical poetry of Andrew Marvell that (HP Lovecraft) himself might have enjoyed”.

A prequel to Wilson’s novel ‘Bios’, an excellent story. Chaia Martine’s brain was rebuilt by nano-technology after being crushed in an accident on the notoriously toxic and human-unfriendly planet Isian.

Many years later, reaching mental adulthood for the second time, her wedding is jeopardised by strange communications which appear to be from the planet itself. In fact the accident many years ago has left her with an infection through which she is able to engage with the planet and a much bigger, although fundamentally less complex, intelligence.

Michael F. Flynn Built Upon The Sands of Time.
Originally in Analog

Scientists meeting in a bar in an Analog story. Not a good omen.

However, the story is a cut above stories of this type. An Irish pub is visited by a melancholy scientist, who has been experimenting with ‘quantum foam’. Said foam disturbs the probability waves which, undisturbed, pass for history.

His experimentation, an attempt to put right a dysfunctional family life, cause ripples. And like a stone thrown in a pond, the ripples spread outwards. And outwards.

Phew! After reading my way through Dozois’ hefty annual collection, and all the way through Hartwell’s, I finally get to read Chiang’s latest novella.

And once again the less than prolific Chiang shows that quality is far, far more important than quantity.

A sort of Alternate History, although I hate to use that term, under which a lot of rubbish is quickly written and published. Chiang postulates a Victorian Britain in which the ‘doctrine of names’ is the fundamental scientific foundation upon which we live. Scripts of neatly composed letters are used to breathe life into otherwise inanimate robots. Will the populace stand for robots which can in fact do more than their programming allows?

Chiang’s take on societal attitudes to AI and to change and to science is beautifully crafted. I can wait a couple of years between stories if they are as good as Chiang’s.

So what is the conclusion on Hartwell’s #6th?

Standouts in this collection are Le Guin’s ‘Birthday of the World’, Egan’s ‘Oracle’, Reed’s ‘Grandma’s Jumpman’, Wilson’s ‘The Dryad’s Wedding’ and Chiang’s ’72 Letters’. However, overall I thought the collection a little weak. The inclusion of several storylettes from ‘Nature’ didn’t appeal to me, and a lot of the other stories were fair to middling.

Strong stories I identified as being the pick of the Dozois annual collection were Kress’ ‘Savior’, Swanwick’s ‘Raggle Taggle Gypsy-O’, Shepard’s ‘Radiant Green Star’, Stross’s ‘A Colder War’, and McDonald’s ‘Tendeleo’s Story’ – and for none of these to appear in Hartwell’s collection does mark it down for me, even accounting for the fact that Hartwell’s collection can not incorporate as many novellas.

Hartwell, unlike Dozois, did find space for Ted Chiang’s critically acclaimed ’72 Letters’, and Hugo winner in the short story category, Langford’s ‘Different Kinds of Darkness’, both of which I felt were serious omissions by Dozois. Finishing off this collection with the Chiang story left me on more of a high than would otherwise have been the case.

Interestingly, Nebula winner ‘Godessess’ by Linda Nagata, from SciFiction in July 2000, was included by neither Hartwell nor Dozois.