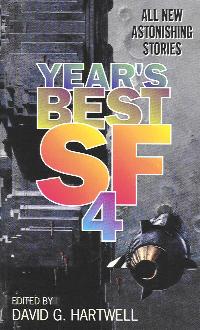 Not a true review, as the story summaries were written a couple of years ago before I got in to ‘proper’ reviews.

Near future US in which the net has encouraged like minds to build real communities together. A son visits his parents in the midWest and begins to exorcise some father/son issues whilst his mother hunts game.

Contact with Shiva, a planet with a piezoelectric form of like, with flat tile-like creatures. Initial reaction to the humans is dramatic (electric, in fact), but some of the travellers choose to become incorporated into the community. Hard SF with a nod to Hal Clement, but with a human dimension.

Norman Spinrad. The Year of the Mouse.
Originally in Asimovs.

The Chinese attempt to resist the irresistable encroachment of Disneyesque US society.

Mary Soon Lee. The Day Before They Came.
Originally in Interzone.

A mother and her son prepare for his birthday. The domestic excitement overtakes the rather more important news.

Rob Chilson. This Side of Independence.
Originally in Fantasy & Science Fiction.

Earth has reached the end of its useful life, and it is being aggressively mined for its last resources. However, some still choose to live on the planet, resisting the blandishments of those who cannot see the attraction of Earth.

Alternate Worlds come into contact, with the Beatles and the Titanic being two examples of multiverse branching. A good knowledge of the Beatles will help enjoyment of the story.

Ted Chiang. Story of Your Life.
Originally in Starlight 2.

First Contact – describes (at times in a little too much detail and dips into Diagram Supplied territory) the struggle to communicate at even a basic level with extra-terrestrials. Once the fundamental principle behind the alien communication is resolved, progress is slightly better. Interwoven with an extremely well written mother-daughter story. The nature of the communication process necessary to communicate with the aliens, in which the whole is seen before any sequential processing can be undertaken, is used in the mother/daughter narrative, with the mother having knowledge of her daughter’s entire life and death throughout. Chiang doesn’t write much, but what he does write is well worth reading, and re-reading.

This could easily be mistaken for an Ursula K Le Guin Hainish story (this meant as a compliment). In a single sex society (female) genmod has lead to the equivalent of various ‘breeds’ of women. A Dunlin visits the family of her Chrome.

Mary Rosenblum. The Eye of God.
Originally in Asimovs.

The first contact with a humanlike race, the Rethe, leaves humankind at a grave disadvantage. But the Rethe themeselves have an almost fatal flaw. Etienne, a human empath, is called upon to rescue a human from a cliff face. The location of the cliff face, and ensuing drama, resolves a number of issues. The alienness of the aliens is particularly well handled.

Three soldiers and a war reporter reminisce. One recalls an encounter in which he was able, in virtual safety, use a powered armor suit to confront bandits in the mountains.

A repressive regime in the future is sending refugees back in time through radiant doors. Struggling to face the flood of traumatised refugees, a glimmer of hope suggests that maybe the future can be prevented.

Short, deceptively sensitive story, in which the telling of the tale which lies in the weaving of a centuries old carpet is beautifully told.

Dominic Green. That Thing Over There.
Originally in Interzone.

Hartwell classifies this as Alternate History, which I cannot fathom. High in the mountains of China/Tibet evidence of a millenia old conflict comes to light. A superior form of being were wiped out, but their DNA will live on.

Humankind is under threat as aliens restore Earth to nature. A number of massive spaceships flee the Earth. One eventually returns to find many of the species subtly changed, but the aliens routed by man’s best friend.

Some years after his heyday of a popular TV show with his robot dog, Ridge Gilby has a chance to return to fame and fortune. But whilst his path has been a downward one, the robot dog, Clunky, has had a much better time of it.

David Brin. Life in the Extreme.
Originally in Popular Science.

Bit of a mish mash. Starts off promisingly with derring-do hobbyist being shot into space, then rather trails off into an Origin of Uplift

Michael Skeet. Near Enough to Home.
Originally in Arrowdreams.

Alternate History based on the American Civil War, and the relationship with Canada. Where the reality and the alternate divide is a mystery to me, as is how this story can in any way be ‘clearly’ SF as Hartwell claims are all the stories in the book.

David Langford. A Game of Consequences.
Originally in Starlight 2.

As children learn, play with fire and you get burnt. On a hot, hot summer day two physicists learn that lesson as it gets even hotter.

A lesbian relationship which could not survive the death of a child is followed by one which attempts to survive in the protected environment of a high security, high income tower block many miles from the urban problems. The moral dilemmas are nicely framed.

Pocket communicators linked to the web facilitate a more interconnected society in Japan. An American who tries to buck the system finds herself in great difficulties.