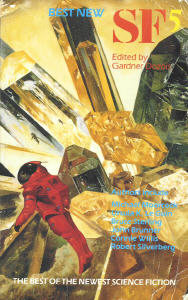 Story summaries written between 1991 and 1996. Subsequent modifications identified as such.

The eponymous hero has been ‘stunted’ ie tweaked to remain physically a teenager. His filthy rich mom has been tweaked to be a scale replica of the Statue of Liberty.

Crew of the spaceship Shoby using the new churten drive, which has a strange effect on their perceptions.

Cop finds a half-woman/half-leopard chimera, uncannily like the painting ‘The Caress’.

Physicist about to get Nobel Prize for work carried about by old friend.

Moslem extremist. [14.09.02 – I put this page together three days after the first anniversary of 9/11, and was prompted to read this story again. Plot : a Muslim journalist visits the USA to interview a rising rock star, Tom Boston. Bearing in mind that the story was written in 1989, the backplot is this: Russian has fallen to Afghanistan ‘terrorists’, and the USA has lost its position as a global political power by the arab countries merging, and by the EEC and Japan going their own ways. The Arab visitor sees the future danger the rock star may pose, through rallying the American people. The journalist, safe in his convictions, shares cocaine laced with a carcinogenic chemical with Boston. One of the underlying texts is that even in its reduced position, Americans can still know little about the world beyond their borders, and remain assured that they have a role as the world power, and that the immoral West still assumes the moral high ground.]

Journalist comes across an angel-like alien near to death – offering the chance at the biggest story of all time.

Husband returns to his ex-wife who has had their dead daughter ‘resurrected’ – physically perfect, but with no memories. Can he help?

Bears discover fire. But Bisson doesn’t explain whether, having achieved this evolutionary leap, their toiletting behaviours are similarly changed.

Japanese eccentric attempts to eat his way through a steamy and very nasty South American jungle (well, a representative portion of it).

A conscientious objector to WWIII takes a vow of silence and sets out on a marathon walk.

John Kessel. Invaders.
Originally in : The Magazine of Fantasy and Science Fiction, October 1990.

Pizarro’s conquistadors and the invading Krel are contrasted.

A concerned brother travels to find his sister. She had been scouting for ancient treasures, and found something rather different – aliens, and lurve.

Stylish Post Holocaust story in which sentient animals now have the edge over the remaining humans.

Hillalum joins the effort to build a tower to the roof of the world, a project many generations in the making.

Far future in which dilettantes use clones to experience a wide range of emotions.

Scientific goings-on in Latin America which lead to regeneration of tissue and a breed of sterile macho males who are essentially immortal.

Inside a disease colony.

Brains are replaced with electronic ones during adolescence to ensure longevity.

VR walk across Jupiter to get in the Guinness Book of Records.

The crew of an iceberg trawler find one near San Francisco – and more.

An eccentric inventor puts an electrical charge through the upper atmosphere, banishing Night.

Pat Murphy. Love and Sex amongst the Invertebrates.
Originally in : Alien Sex, 1990.

A scientist designs robots to reproduce.

Multiple realities that starts out as a literary hoax.