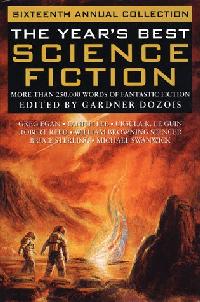 The story summaries below were written when this was, along with Hartwell, my main source of reading matter for short SF. Summaries were written in 1999.

Coming of Age story on a watery world, set against a backdrop of religious fervor.

The physics of diving into a black hole. And how to get yourself out of a deep deep hole. I should have paid more attention during Physics classes at school. The physics is undoubtedly 100% kosher, but it’s all gobbledegook to me.

An antique dealer/second hand dealer/craphound comes up against some offworld interest.

Jedella has been protected all her life. Very protected. The innocent turns up one day and stays, and..

Deep, deep in the desert an alien spaceship is discovered. And it holds many, many secrets.

Legend has is that there is an island in which an insect bite can lead to immortality. But is this a blessing, or a curse?

The Quiet War let loose macroforms – subterranean genmod creatures. Indira is a hunter, and she takes on a job on Europa, where a monastery claims that a ‘dragon’ is responsible for damaging their undersea farm. All is not as it seems.

A second hand bookshop find of ‘anomalous’ books, perhaps from another timeline, leads to a message from outer space. Unfortunately, the message is not a happy one for planet Earth.

A couple in at the beginning of nano-engineering. The story starts small, develops into a sweeping galaxy-spanning saga, and returns almost (but not quite) back upon itself. One of the highlights of this collection with enough SF in there for anyone, but a corresponding amount of humanity to balance.

William Browning Spencer. The Halfway House at the Heart of Darkness
Originally in : Lord of the Fantastic

A VR addict is deep, deep in trouble and rehab. But the tables are turned and she ends up saving her counselor and herself.

Martha Kivelsen is on Io, dragging a sled with the dead body of her colleague. This produces an unexpected effect with profound consequences.

Ted Chiang. Story of Your Life.
Originally in : Starlight 2

First Contact – describes (at times in a little too much detail and dips into Diagram Supplied territory) the struggle to communicate at even a basic level with extra-terrestrials. Once the fundamentally alien principle behind the alien communication is resolved, progress is better. The nature of this communication, in which the whole has to be seen before the parts can be analysed is interwoven with an extremely well written mother-daughter story which benefits from a knowledge of the whole. He doesn’t write much, but what he does write is worth reading.

Eco-disaster in Eastern Europe causes problems for a family, whose son is badly affected. He finds his home amongst similarly affected others.

Drilling on the Moon, against a backdrop of a compromised planet Earth. Deep beneath the mantle, an intelligence of a different nature is stirring. Avoids the Diagram Supplied, but does give an extended verbatim technical presentation.

Rob Chilson. This Side of Independence.
Originally in : The Magazine of Fantasy & Science Fiction, February 1998

Earth has reached the end of its useful life, and it is being aggressively mined for its last resources. Some still choose to live on the planet.

Chris Lawson. Unborn Again.
Originally in : Dreaming Down Under

Using ‘genetic materials’ to combat the likes of Alzheimers may have side-effects. One person who knows this to their cost exacts an insidious revenge.

Genmod future full of transhuman characters. War is imminent, but there are some who may have within their powers the ability to prevent it. Andre Sud, priest is one of them. Bioengineering with the aid of nanotech grist, and more Ian M. Banks than Ian M. Banks. A highlight from this volume.

Virtual Reality beauties are the far from ugly Ugly Sister to the Cinderella of this story.

William Barton. Down in the Dark.
Originally in : Asimov’s Science Fiction, December 1998

A comet strike on Earth leaves a couple of thousand remnants of humanity scattered around the Solar System. But on one moon contact with an intelligence paints (literally) a more optomistic picture than had appeared to be the case.

Powerful tale of three captives making good their escape from the two-legs who have invaded their planet. Their escape is not final.

Cherry Wilder. The Dancing Floor.
Originally in : Dreaming Down Under

A space habitat carved out of an asteroid contains more than at first appears to be the case.