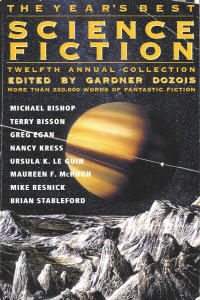 An Ekumen story set on Werel. Solly is constrained, an asset-owning woman in a male-dominated world. She, and a potential lover, have the chance to leave a lot behind in order to create a future for themselves.

Robert Reed. The Remoras.
Originally in : The Magazine of Fantasy & Science Fiction, May 1994.

Quee Lee and Perri are a couple on a galaxy crossing spaceship of immense size. With virtual immortality and luxury, there is a need to keep oneself from becoming jaded. The short lives of the Remoras, whose perilous existence on the outer skin of the ship, raddled and mutated with radiation, appears to offer a change of lifestyle.

Diyet is jessed, enslaved to a kindly master. A route out of her servitude presents itself, but it will take a huge leap of faith to claim her freedom

A woman frozen out of a research project and whose work was claimed by her sister, extracts her revenge.

Deep deep in subterranean caverns on Mercury, are the unrecognisable descendants of alien life. A symbiotic relationship, and a desire to return. (nb subsequently reprinted in Clarkesworld Magazine #83, August 2013)

Native American witchcraft/medicine, with a rogue elder accounting for one of the seafaring mysteries of yesteryear ( ETSELEC EIRAM EHT)

A resident of a retirement home appears to have a good memory for some old songs – far too old for her to have remembered first-hand. And at the same time as he explores her longevity, the protaganist’s daughter is suffering from a premature ageing process.

Terry Bisson. The Hole in the Hole.
Originally in : Asimov’s Science Fiction, February 1994.

A search for Volvo parts leads to a very strange auto parts shop, which is disposing of car tyres in a very novel way – through a portal to the Moon.

A vampire-like entity with a craving for human experiences.

Child genius Cletus Jefferson falls in love with blind violnist Amy Linderbraum. Her blindness triggers his interest in the workings of the brain and he identifies a means of boosting IQ dramatically.

Near future Australia, with a private detective uncovering industrial espionage surrounding a drug which can ‘prevent’ homosexuality and related non standard sexual behaviours.

Far future aliens research Olduvai Gorge, one of whom is able to link through artefacts they find to scenes from the past. Seven scenarios which show the brutality of mankind are revealed, showing the menace that mankind was (and will be).

Office politics and Human Reseource Management taken to an extreme.

Space Arks approach their final destination. Catastrophe befalls them on a macro level, on on a micro level a learning disabled child causes stress within a family.

Hmm. I usually enjoy Waldrop’s humorous fiction, but this story didn’t do anything for me. Itinerant musicians chance upon a competition.

Ekumen researchers go undercover on an alien planet in which gender roles are reversed and a man’s life is an often short and brutal one.

An American liberal is in the UK when the extreme right USA revolts against democracy.

An Alternative Presley who is much more politically oriented than the King.

Mary Rosenblum. California Dreamer.
Originally in : The Magazine of Fantasy & Science Fiction, May 1994.

Post quake California, with relationships sundered, and created, by the quake.

A Hebrew prophet ponders his future and faith, and what may hinge on his decision.

Murder mystery in a hi-tech, genmod future. The sleuth in this case is one Oscar Wilde, and the killer is using a most unusual method of killing his victims.