Strahan racked up #13 volumes of his Best SF&F of the Year anthology, initially published by Nightshade Books, and latterly by Solaris Books. It would appear that Solaris Books is now in ‘reduced circumstances’ and is now an imprint of another publisher who has a target audience isn’t really up for a hefty Year’s Best collection of short stories. This volume is SF only, from Saga Press, a publisher whose name raises a smile over her in the UK as Saga is a Big Name in providing services and holidays for retired people. 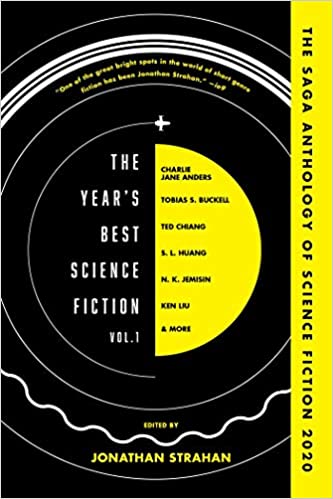 Anyhoo, this volume arrived on the doorstep very soon after Neil Clarke’s ‘competing’ volume, so that’s two anthologies to read in less than 12 months, which is a bit of an ask for me these days! As per Clarke’s volume, I’ll note the contents here and fill in reviews/summaries/notes as I work my way through the volume. The book has a text-only approach, with a front cover that isn’t full width, revealing a yellow strip of the page underneath. Is Saga staffed by crazy mofos or what??

It looks like there are only four or five stories which appear in both Strahan’s and Clarke’s take on what constitutes the Year’s Best, so lots of reading!

Charlie Jane Anders. The Bookstore at the End of America.

Saleem Haddad. Song of the Birds.

Also in the Neil Clarke take on the year’s best, where I read it and noted : “A short, simple but effective vignette from Palmer. Humanity is spreading remorselessly throughout the universe, as the native intelligence life on one planet has found to their cost. There are but a half dozen of them left, in the final, small corner of their planet that has yet to succumb to the terraforming. There is one human who has some regret at the costs, and reflects on the loss of the habitat and its inhabitants, but it’s too little, too late.”

Ted Chiang. It’s 2059 and the Rich Kids are Still Winning.

Fran Wilde. A Catalog of Storms.

Anil Menon. The Robots of Eden.

Tegan Moore. The Work of Wolves.
Originally in Asimovs, July/August 2019.

Also collected by Neil Clarke in his take on the Year’s Best, where I read it but wasn’t blown away as I would expect from a story selected in two of the year’s best volumes.

Also anthologised by Neil Clarke, where I noted : A story I really enjoyed reading. The protagonist is on a mission, to return to humanity’s homeworld, Tellus. He has been enclosed in a temporary skin, which will become permanent at the end of his mission and his return, and he has an embedded AI to help him on the mission. It transpires though that the homeworld hasn’t succumbed to environmental collapse, and, indeed those who remained on Earth have flourished *because* rather than *despite* the loss of the rich elite who fled generations ago. Jemisin drip feeds the reader as the story progresses with information about what has happened, which kept this reader engaged. Admittedly the solution to Earth’s problems is a little simplistic and idealistic, and conservatives will doubtless object but hey, I’d contribute to a Kickstarter to help the rich elite flee the Earth. [28-Nov-2020]

Greg Egan. This Is Not The Way Home.

Fonda Lee. I (28M) created a deepfake girlfriend and now my parents think we’re getting married.