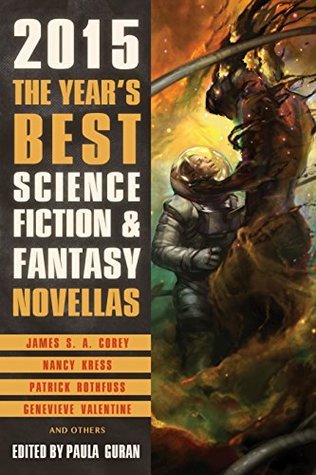 Prime Books have been publishing Rich Horton’s take on The Year’s Best Science Fiction and Fantasy for several years, and have harnessed Paula Guran, editor of their annual Year’s Best Dark Fantasy and Horror to produce the volume in hand.

As she discusses in her introduction, it’s always been difficult to squeeze lengthy novellas into the annual Year’s Best volumes. The aforementioned Horton, and Jonathan Strahan have substantial volumes (as is Guran’s) but as they covered SF and F, there’s a limit to how many lengthy novellas they can fit in. The mighty Dozois anthology has the advantage of being purely SF (huzzah!), but even that volume would struggle to fit in more than a couple of really lengthy novellas.

Mind you, we think it’s tricky, but back in the 1960s/1970s the Year’s Best volumes, whilst purely SF, were dinky little volumes by today’s standards. Back in the day, editor Terry Carr, published sixteen annuals of his take on the Year’s Best SF, but also experimented (for two years only) with a complementary novellas anthology. Again, the pocket sized paperbacks the older ones amongst us remember fondly.

In this volume Guran furnishes :

Mary Rickert. The Mothers of Voorisville. Originally published online on Tor.com and still there

Seth Chambers. In Her Eyes.. Originally in The Magazine of Fantasy and Science Fiction, January/February 2014. In my review I noted it was ‘an intense story, with a clever ending, and one that you need to decompress from after reading it.’

James S.A. Corey. The Churn : a Novella of the Expanse. Orignally published as an e-book, the story is part of his ‘Expanse’ series, setting out the life of Amos Burton before he reached for the stars.

K.J. Parker. The Things We Do for Love.. Originally published online on Subterranean Magazine andstill online

Pasi Ilmari Jasskelainen. Where the Trains Turns. Published for the first time in English on Tor.com and still online.