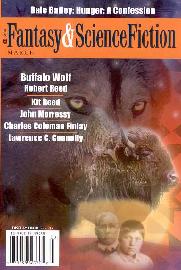 When ‘Raven Dream’ appeared in the Dec 2001 issue of F&SF I noted it was very much an opening story in a sequence, with only a little revealed to start with.

‘Buffalo Wolf’ continues the story, and more is made clearer, although the overall impression is very much of Gene Wolfe, with the author witholding the full pictures. Rather than being ‘little people’ hiding in a forest (my reading of the first story), young Raven is evidently a native American, and it is the encroaching civilization which they are hiding from. That civilization is just slightly different from our own, and young Raven travels with his grandfather, to find answers to the questions that he has.

We can empathise with the young boy/man, in his attempts to make sense of big things.

John Morressy. The Resurrections of Fortunato.

A re-take on ‘The Cask of Amontillado’ in which Fortunato escapes his entombment, and waits a long, long time to come face to face with his nemesis.

Charles Coleman Finlay. For Want of a Nail.

A wry cod-fantasy yarn, in which a wise-cracking pair of thieves go a-robbing. Quite probably a treat if you like that kind of thing.

A good old-fashioned horror story. Narrated by a young man (as all the best horror stories are), who gradually unfolds a chilling tale, in which the slobbering, lip-smacking conclusion is a treat.

Worth reading IMHO for a single line. Young Nelly’s father has run away with another woman and ain’t coming back : “He cut off his mullet and left in a new forest green sports car’. What Dolly Parton could do with a lyric like that!

Actually the story is worth reading for more than that. Young Nelly and his mother go looking for her mother’s parents – on account of who else can you turn to when you are in need.

Mind you, the fact that her grandparents are dead….

A first-published story. The third Reed in this issue takes immersive VR computer games to the nth degree : there is an elite in his society which spend their entire lives in online RPGs. Tended by the have-nots in society, things are find until the money starts to run out.

Reed attempts a complex story structure, which was probably a bit too much for a first story, but otherwise does well.

Hang on a second …. a second SF story this month! Wowza.

Pittsburgh is the setting for a story, a city which we see through the eyes of a scientist who also works as a bicycle courier.

An it is Nix’s eyes which are one key to the story. She is seeing and sensing strange, strange things.

A package is given to her to deliver, to a penthouse suite in a hotel which has been taken over by someone who has a need for what is in her package.

It transpires that the unscrupulous businessman she meets has perfected a technique of getting his sweat-shop workers on a true 24/7 shift. And it is their now subsumed dream states which are making their presence felt.

A good mix of stories this month. If you don’t find a couple of them to your liking then you’ve picked up the wrong magazine!