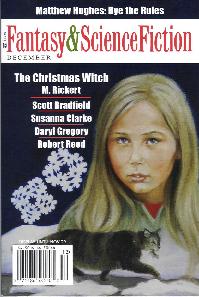 Another of Guth Bandar’s regular appearances in F&SF.

Rickert has provided some classy stories in F&SF in recent years, and this is no exception. This is a contemporary story of a young girl, Rachel, whose mother has died, and whose childish interest in the bones of small creatures she finds in the garden and nearby woods becomes a somewhat darker interest, and Halloween sparks even more interest in matters witchraft.

Her collection of bones begins to have a malign influence, and her relationships with friends, at school, and with her father suffer, leading to a false assumption of parental abuse. Fortunately the Grandma arrives and is able to help. It’s a tight, claustrophobic story, with that undertone of menancing horrors that I finds works much better than the in your face (on your ass) type.

Further adventures of the anthopomorphic speaking canine, who this time enjoys an academic sojourn in Germany, who provides, as with the previous story, a moral.

Gregory’s stories have pretty much fallen into two categories for me – those which impressed, and those which did little if anything for me. This story joings ‘Second Person, First Tense’ and ‘The Continuing Adventures of Rocket Boy’ in the former of these categories.

It’s a strong story, starting with a ER visit from a woman who is accompanied by a man whom only she can see. We find out, gradually, just how and why her Christ-like companion has entered her life. Has she truly been the recipient of a revelation whilst on her own road to Damascus? Or is it catching, and is a variant-CJD causing temporal lobe epilepsy and sensations of euphoria and being in the presence of godhood.

Gregory gets the reader into the head of the woman, who rues ever breaking bread with the women over the road, as the macabre details are revealed.

A monologue from an elderly gentleman which shows just where the current obsession with pills and longevity will take us.

Not having read Jonathan Strange & Mr Norrell, but well aware of the praise heaped up on it, I had hoped to get a bit more from this. It’s a fairly straightforward gently comic fantasy, featuring on John Uskglass aka The Raven King, and a curmudgeonly charcoal burner and his pet pig. Uskglass is evidently a key figure in the aforementioned novel, and I’m guessing that the story will be less effective as a singleton as opposed to being read in connection with the novel n.b. the story is from Clarke’s recent collection ‘The Ladies of Grace Adieu

Rickert and Gregory provide top quality at longer length, with the three shorter stories losing out in contrast. And there’s the Guth Bandar novelet.