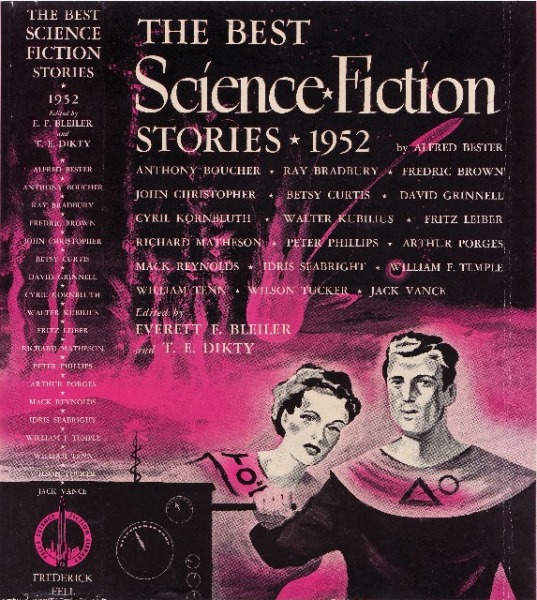 Just (Oct 2021) replaced my UK (reduced number of stories) edition The Best Science Fiction Stories : Third Series, with the original US edition. And now (April 2022) I’m starting to read it.

Walter Kubilius. The Other Side.
Originally in Super Science Stories.

Young Jim Carringon seems to be like every other teenage boy in a small town in America. However, his town is surrounded by a dome, to protect them all from the outside. At least that’s what everybody says – young Jim has a feeling that something is not quite right. Regular visits from the one doctor in town to check up on him also don’t add up – why is he getting this special treatment? And what does everything he wants to happen actually happen?? (Spoiler : he’s the last human in an alien zoo exhibit!) Nice enough as far as it goes and very much of it’s type. [29th April 2022]

Alfred Bester. Of Time and Third Avenue.
Originally in :

A nice little story set in a New York bar. A guy from the future has to complete an urgent mission – persuading a young man to part with an almanac from the future which has appeared in his time due to a future error, and which he has just unknowingly bought from a bookshop. The future guy has to persuade him to give it up – he is not allowed to simply take it. And how do you persuase someone to give up something that could lead to great wealth for them, through using the knowledge in that book to play the stock market etc? There are some neat touches in the story, esp. the guy from the future’s not quite perfect grasp of 50’s American argot. [25th May 2022]

A tale in two halves. The first half is wryly humorous, as John Barlow, accidentally put into suspended animation due to a dental anaesthesia mishap, is finally revived some decades later. His attempt to make sense of the brave new world around is amusing and entertaining.

The second half is altogether darker, as we find out the true nature of human society, and the true nature of Barlow. It transpires that the planet is populated by people of a low IQ, who breed like rabbits. And they are looked after by a much much smaller population of intelligent people who have to work very hard to keep this running smoothly. And it turns out that Barlow is up there with the likes of Donald Trump in terms of a self-absorbed selfish bigoted yadda yadda yadda. He sees himself as having a solution to the problem of overpopulation (it is a *final* solution). However, he does meet a satisfactory ending, as far as the reader is concerned, after some fairly detailed exploration of the darker side of humanity. There are a couple of bits in the story which led me to wince, and I’m old enough to remember a lot of stuff from not long after this was written, heaven knows what millenials will make of it! [7th June 2022]

Betsy Curtis. A Peculiar People.
Originally in : The Magazine of Fantasy and Science Fiction, August 1951

A story from an author new to me (true of about half the stories in this volume). An ambassador to Mars visits Earth, with a secret to keep – he is a robot, and Earth must not know that Mars had robots indistinguishable from humans. He falls in love with the young daughter of an Earth diplomat. Can true love bloom between man and robot? (SPOILER : Yes, on account of the fact that the daughter is -also- a robot). A nice story with details you don’t get in other stories in this volume. [7th June 2002]

David Grinnell. Extending the Holdings.
Originally in : The Magazine of Fantasy and Science Fiction, April 1951

A short, lightweight, wry piece in which an inventor in rural USA dreams of reaching the moon. He has the support of his wife, and his brother and sister-in-law. Well, a little support, as his brother has hiw own plans.. [9th June 2022]

Wilson Tucker. The Tourist Trade.
Originally in : Worlds Beyond, January 1951

A short, humorous yarn, whose humour stands up well to the test of time. A suburban family are somewhat inconvenienced by time travellers from the future – it seems that they and their house are to be a daily attraction on scheduled historical tours, with a tourist guide detailing their primitive customs and practices to his clients on his tour bus. Something must be done! [14th June 2022]

The Nuova Vita lands on Mars, humanity’s only hope of surviving beyond the seemingly inevitable nuclear catastrophe threatening Earth. Sadly, the spaceship crashes on the planet, ironically due to interference from the Earth as it does indeed go nova due to nuclear chain reaction. All is not lost, as there are two survivors. Well, no, you see, as the two of them are men. And they are an ill-matched pair – John, an erudite, weedy academic and Malatesta, a burly, aggressive businessman who is very much the pragmatist. The stronger man immediately instigates a master-slave relationship, and when one final survivor of the wreckage, a female appears, she takes the side of the ‘real man’, and John is banished. However, he does manage to turn the tables. There’s quite a bit of philosophical dialogue, and it’s touching to read a story from a time when a Mars with a breathable atmosphere, vegetation and running water and native species was something that was possible. [14th June 2022]

A story from British stalwart John Christopher, who I still remember getting a thrill out of reading several of his books in the mid70s in my mid teens (‘Day of the Triffids’ and ‘The Midwich Cuckoos’ more obviously, but also, writing as John Beynon, ‘The Secret People’ and ‘Stowaway to Mars’*aka Planet Plane/The Space Machine). I had started this paragraph with the words ‘An early story from..’ but having had a quick check I see that his novels under the Beynon nom de plume were in fact written as early as the mid 1930s, which came as somewhat of a surprise to me. So this story is from an experienced author, not a new one. Max Larkin is brought out of retirement, an urgent mission to be undertaken. It appears that a scientist may have tampered with DNA and created a genius who is unlike those who have come before, who have been a genius in one field, but otherwise normal. Is there a multi-facted genius out there, and if so, what if they fall into the hands of one of the mega-corporations who straddle the world? A balance must be kept! It’s a story that reads more from the 1960s, and is well written. A chilling final sentence : “He always remembered how she stood, a lonely goddess inscrutably smiling as he raised the weapon against her.” [20th June 2022]

A story from an author new to me, both under the Seabright nom de plume, the Wilton Hazzard nom de plume, and her married name Margaret St. Clair. Although to be fully informative, I shoul dpoint out her name at birth was Eva Margaret Neeley. This is a short, and dark story, set in a future in which humanity had spread throughout the universe, unwilling/unable to control it’s population and consequently rapacious, and it looks at the fate of an alien race who have had the misfortune to have come into contact with, the final few members of their race fighting each other in avian combat for our enjoyment. Can a well-intentioned human save them? Nah. [20th June 2022]

One of the earliest of Matheson’s stories, although the previous year’s volume in this series had his standout Born of Man and Woman. Like that story, this one is written in a very distinctive style, very stylised and still unsettling some 71 years later. There is an extra frisson to that unsettlement now, as some of the description of the pre-teen girls playing a part in the war effort are just a little … prurient for modern sensabilities. One minor beef I have with this story, as with others from this period, is that the title often gives too much away. So it doesn’t come as much of a surprise to the reader when, during the war, these otherwise sweet and innocent and otherwise normal young girls are shown to have powers which bring the approaching enemy to a dead stop in their tracks. [20th June 2022]

A dialogue-heavy story that could easily have been written by Asimov himself. The company making and selling robots for domestic use, Servotrons, are in a panic as a self-appointed critic calling himself ‘The Preacher’ has the public up in arms as these robots are without souls, and are ergo abomination and also slaves. With stock in the company falling, a cunning plan has to be devised to outflank ‘The Preacher’. But there is a twist in the tail! (Spoiler : the Servotron which they prime to defeat him in debate fails abjectly, but in doing so The Preacher has a moment of self awareness and reveals that he, too, is a robot, primed by a competing company to damage their rivals). [23rd June 2022]

A bit of a head-scratcher, as I got to the end of the story wondering if I had missed something. Was there a play on words at the end – was it a shaggy dog story? But I just think the humour didn’t quite gel for me. The protagonist is a mass murderer, who has killed several wives (namechecking a real life wife murderer). But in failing to murder his latest wife in the bath, he turns out to be the saviour of humanity, on account of the wife is unable to be drowned in the tub, on account of her having gills and being able to breathe underwater, on account of being a Venusian. And, worserer still, she tells him (as all Evildoers tend to do) of the Venusians plot to infiltrate humanity and take over the Earth. He tries many other methods to despatch her, all of which are signally ineffective, until he finds the one way to kill her. (Check out the name of the story). Thus he saves humanity. [23rd June 2022]