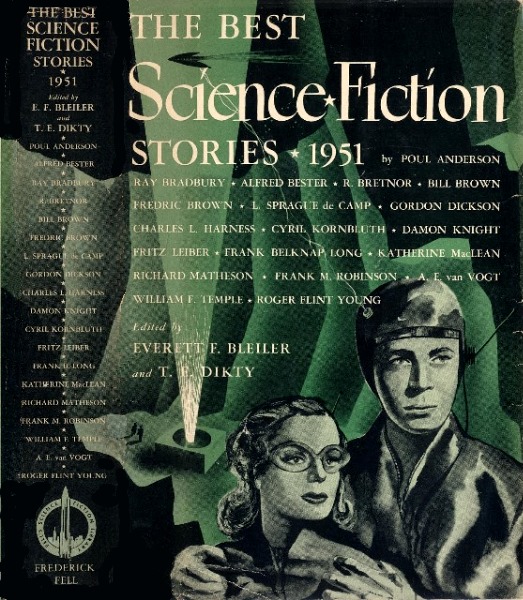 I did have the UK edition (restricted number of stories and size), but I have just spent a little bit of cash on the US edition (signed by Dikty!)…

A story which appears in print for the first time in this volume, which is rather strange for a volume aiming to provide the best of the previous year’s SF. The story does very much relate to the topics discussed in the first part of the editorial introduction, and in the second part of the editorial introduction which looks at each story in the volume, the editors praise the extent to which the author has drawn on ethno/anthro research. I liked the initial cut of the story’s jib, but as it progressed, less so. The setup is that a solo space traveller has to make an emergency landing on a planet. Lucky for him, the terran-descended and terran-speaking denizens appear to welcome him with open arms. But it turns out that their gifts provide an existential threat, as he is required to destroy their gifts and furnish even better ones in return, which they then destroy, which is repeated until one party has no more gifts and is killed. Fortunately, one of the local women (who is topless!!!!) befriends him and using his cunning and guile, plays the game until he is able to win without fatality on either side. And even better than that, with his willing and fecund wife, he very much comes out on top as the daddy. Fifteen times over. Nice to see an early example of an ethnographic/anthropological SF story, but it is rather dated, and it is more from a historical perspective than an enjoying the story angle! [6th Nov 2021]

Reginald Bretnor. The Gnurrs Come from the Voodvork Out.
Originally in The Magazine of Fantasy and Science Fiction.

According to Wikipedia, this story was a finalist for the 1951 Retro-Hugo Award for Best Short Story, and in the Encyclopedia of Science Fiction, no less than John Clute called it “hilarious”. I found it rather too dated and broad in it’s approach to do much to my funny-bone, although the cavalry-obsessed Colonel Powhattat Fairfax Pollard took my fancy, as he could have come from Joseph Heller’s Catch-22. Somewhat like watching the 1940s film “Hellzapoppin'” nowadays, and realising humour has moved on in half a century (fortunately). Anyhoo, the story features a Swiss emigree to the USA, mit der funny vay of speaking. who iss a mad scientist unt who invents ein secret veapon which sends out furry little timetravelling rodent-like aliens vot can chew zer trousers off an enemy soldier in zeconds. [28th Nov 2021]

Cyril Kornbluth. The Mindworm.
Originally in : Worlds Beyond, December 1950.

Gosh, this is a strong, unsettling story now, I can imagine the impact it had on the reader 70 years ago! The post-war post-atom bomb enemy-within of the time is a strong element to the story, which sees an unwanted child, raised in an orphanage, affected in utero by the radiation from an atom-bom test, develop the ability to use his mind to read other minds, draw energy from those minds, and destroy those minds. As he grows older and the story progresses, we see less of him and more of ‘The Mindworm’ as a discrete entity, which has no qualms about the victims it chooses. We see into the many minds it reads, and there are a lot of dark thoughts there. However, at the end it realises, somewhat belatedly, that whilst it’s existence is due to the new horror of the atom bomb, it is part of much older horrors, and there are those attuned to those horrors. WAMPYIR! You can read the story on the Protject Gutenberg website. [21st Dec 2021]

Bill Brown. The Star Ducks.
Originally in The Magazine of Fantasy & Science Fiction.

I’m sure I must have read it at some point in the past, and the seasoned SF reader will be pretty sure what’s happening and what’s going to happen, but it’s still a neat little tale, full of dry humour, as a newspaper journo comes tantalisingly close to the biggest scoop ever. Unfortunately for him, he has just enough time to see the aliens who have landed out back of a remote farm, but not enough time to do anything else but observe as they head back home, with the farmer and his wife sadly not in any way equipped to do have been able to recognise the true import of what has been happening. [1 Jan 2022, yes 2022 FFS]

Roger Flint Young. Not to be Opened.
Originally in Astounding Science Fiction, January 1950

A lengthy (and somewhat overlong tbh) story that consists of a long flashback between an intriguing opening scene and the denouement. The protagonist, Ted, is an electric engineer with a knack, learnt from his dad, of being able to take an individual part and work out what exactly is the bigger thing it has come from. In this way, when he is surprised to find a new part in a toy laser, he is able to ascertain that it is from…. well, we don’t find out straight away, but we are told it’s clearly something dangerous and almost beyond man’s ken. The bulk of the story is Ted forensically investigating other manufacturers, shipping companies, and products to ascertain just what is going on and who is behind it. Pages and pages of it! The sfnal stuff kicks in over the final couple of pages, which are quite rushed, and come in the form of a conversation between Ted and ‘Del’ who is from the future, or rather whose mind is from the future, but is controlling a contemporary body. Ted leaps to a conclusion about the veracity of ‘Del’s’ story, strikes him and unintentionally kills him, leaving him in a bit of a quandary. And the ending ‘Animal? Vegetable? Mineral?’ brings the story to an odd conclusion. If you like forensic, procedural stories about manufacturing electonic parts and logistics theoreof, then this is the story for you. I don’t and this wasn’t. [9th Jan 2022]

I’ve been reading this volume concurrently with Jonathan Strahan’s ‘The Year’s Best Science Fiction Volume 2’ and in my summary of that book, I lamented the fact that 20 out of the 26 stories were near-future Earth stories, and most of which featured AI, technology or environmental issues, rather than SFnal elements. This story provides a clear indication of what that new volume was missing. Van Vogt posits a far distant planet in a far future. The protagonist of that story is a forest, a humongous forest that has developed a very slow hive-mind. We see it go to war with another similar forest, which it wins after an epic struggle. Then humans arrive on spaceships, and the forest remembers how it dealt with them in the past. But these humans are more of a challenge, and the forest is pushed to its limited, but it manages to repel them by going for the nuclear option. Except that the mighty forest hasn’t quite understand that the uranium it is pulling up from deep underground isn’t frightening away the humans, but is being collected by the humans…. Nicely told, and nice to get one’s head out of contemporary or near-future issues and out there into the deep dark. [18th Jan 2022]

Ray Bradbury. The Fox in the Forest.