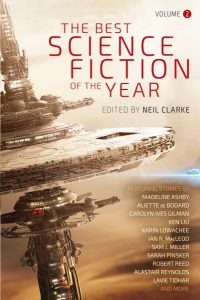 You can support Clarke by not only buying the book, but buying the book from one of the links on his website to give him the additional benefit of an affiliate link!

Ian R. MacLeod. The Visitor from Taured.
Originally in : Asimov’s, September 2016.
Arguably not that much SF in the story I suppose, but as Scientist Fiction goes, it’s a good read. Full review here.

Rich Larson. Extraction Request.
Originally in Clarkesworld Mazine #112, January 2016 and still online.
I didn’t read this story in it’s original publication but read it in this volume and liked it enormously. Full review here. Definitely an author to watch.

Gord Sellar. Prodigal.
Originally in Analog, December 2016.
A story that I reckon I could have identified as being published in Analog without being told so. Full review here.

Nina Allan. Ten Days.
Originally in : ‘Now We Are Ten’, edited by Ian Whates.
-An author I like, but this story which uses a watch with time travel properties to resolve a wrongly hanged murderer in 1920s London didn’t really grab me. The bulk of the story was fine, if you’re into crime/whodunnit thrillers, with the more sfnal elements appearing in just the last few pages.

Lavie Tidhar. Terminal.
Originally online on : Tor.com, April 2016 – and still online)
“..a well written, subtle bit of writing..” I noted in my review when I read it last year.

Madeline Ashby. Panic City.
Originally in : CyberWorld, edited by Jason Heller and Joshua Viola.
A clever, short story from Ashby. The POV is a city AI, who finds cause for concern from above, and whose anxiety levels increase as a maintenance guy heads off to sort out the issue. As the narrative progresses we find out more about the backstory, which leads to a dramatic conclusion.

Sam J. Miller. Last Gods.
Originally in Drowned Worlds, edited by Jonathan Strahan.
Another strong story by a new author I’ve been impressed with. Full review here. You’ll see if you scroll down the page, that Miller gets another story in this volume.

“They All Have One Breath” by Karl Bunker (Asimov’s, December 2016)

Sarah Pinsker. Sooner or Later Everything Falls Into the Sea”
Orginally in Lightspeed Mazine, February 2016 – online here.
A post-Collapse story – “a look at just how tenuous fame and wealth can be…”

Margaret Ronald. And Then, One Day, the Air was Full of Voices.
Originally in Clarkesworld Magazine, June 2016 – online here
I was impressed with “..it’s structure, mix of human and societal analysis, and an altogether different type of First Contact..” – Best SF Review.

Lettie Prell. The Three Lives of Sonata James.
Originally on Tor.com, October 2016, and online here.
The intro : “In a cyber-enhanced, futuristic Chicago, Sonata knows near-immortality is achievable through downloading her mind into a cyborg body after death. But this young artist wants to prove that living forever isn’t the same as living a beautiful life.”. The story touches on themes covered aplenty in the past including longevity and resistance to it by those who don’t have it, and the story does indeed refer to Kress’ ‘Beggars in Spain’, which rather pointed out to me that the characters in this story, and this story itself, weren’t really on a par with Kress’s.

An Owomoyela. The Charge and the Storm.
Originally in Asimov’s, February 2016
Complex story which has descendants of a human generation spaceship co-existing (just) with an alien race. The protagonist has been altered in utero by the alien race to enable her to harness the power from the electrical storms on the inhospitable planet to help them expand the human/alien colony. There is backstory, human emotion, politics, non-cis relations and more in the story.

Robert Reed. Parables of Infinity.
Originally in Bridging Infinity, edited by Jonathan Strahan.
Reed’s ‘Great Ship’ stories date back many years now, and here he adds another piece of the jigsaw, mostly in the form of a conversation between two long-lived residents of the Ship, both of whom have more to their history than might appear to be the case. (I’m a bit rusty with these stories, and even when I was in the full flow of Reed’s output I would have struggled to have spot if the characters have indeed appeared before). Hyperfibre is used in a routine contracting job, but the contract who carries out the job has a tale to tell about their knowledge of this multiversal material, which harks back to the very creation of a similarly enormous vessel.

Suzanne Palmer. Ten Poems for the Mossums, One for the Man.
Originally in : Asimov’s, July 2016.
An excellent story from Palmer, a central conceit that is simple in a way that was common in the 1960s, less so today. The protagonist is a poet, who is seeking his lost muse by taking up a solitary role on a quite alien albeit quite bucolic planet, acting as the sole human observer. There is some strange vegetation, including the titular Mossums, and as he gradually becomes attuned to the planet, he finds out more about the vegetation, and of course, finds out more about himself.

Rich Larson. You Make Pattaya.
Originally in : Interzone, November/December 2016.
Near future hi-tech Thailand is the setting. Dorian is a hustler, who sees a chance to blackmail a celebrity who is visiting the island, incognito, for some sleazy sex. Dorian’s ladyboy hooker companion is his route into this opportunity, but it turns out quite differently, as the tables are turned on him. Larson handles the sleaze well, although there will be a little too much of it in the story for some readers (not for me).

“Dispatches from the Cradle: The Hermit—Forty-Eight Hours in the Sea of Massachusetts” by Ken Liu (Drowned Worlds, edited by Jonathan Strahan)