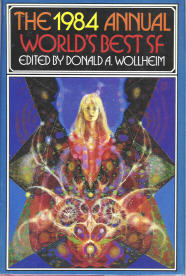 Multiple award-winning modern classic. Vergil Ulam has been experimenting with nano-technology – injecting medically applicable biochips into his bloodstream. The consequences are far beyond his wildest dreams, and the genie is most definitely out of the bottle. 1984 Hugo Best Novelette, and subsequently extended into a novel.

Placed after Greg Bear’s ‘Blood Music’, we see a ‘The King is Dead – Long Live the King’ situation. Asimov’s hoary old Multivac plays a part in seeking telepathic subjects – not a patch on ‘Blood Music’.

Knight of Shallows. Rand B. Lee.
Originally in : Amazing, July 1983

An alternate reality/history murder thriller, with the protagonist chasing an alter ego through murderous timelines.

Spending a Day at the Lottery Fair. Frederik Pohl.
Originally in : The Magazine of Fantasy & Science Fiction, October 1983

The American solution to overpopulation proves popular, even though quite radical. However sometimes even the longest of long odds come up.

In the Face of my Enemy. Joseph H. Delaney.
Originally in : Analog, April 1983

Eismann holds humanity’s future in the hold of his space ship – deep frozen embryos. Called out of hypersleep due to a malfunction, he has some difficult choices to make in order to ensure that his mission achieves its fundamental aim: seeding life on another planet. The choices he makes are not always the right ones, and some are particularly difficult.

The Leaves of October. Don Sakers.
Originally in : Analog, August 1983

Humanity may be squandering its chance to be accepted into the galactic lifeforce. An aeons old tree makes the ultimate sacrifice in the belief that humanity is worth saving.

As Time Goes By. Tanith Lee.
Originally in : Chrysalis 10

The intricacies of FTL travel are given a very human twist.

The Harvest of Wolves. Mary Gentle.
Originally in : Asimovs, December 1983

Post-revolution and post-crash, an elderly subversive does what is necessary to survive in the harsh society.

McCulloch is the first person to test out the time travel apparatus. He is catapulted far, far into an amphibious future, into the body of a lobster-like intelligent creature. He becomes reluctant to return.