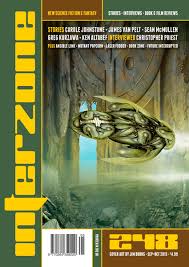 A story that starts out reading like a steampunk story, albeit with the young protagonist a man who has seen the future as being electric rather than steam. McMullen captures the tone nicely, the story reading like a Conan Doyle story. But then the story takes an interesting twist, and an alarming one, as the young engineer finds out just what lengths his employer will go to keep secret their work, and the source of the communications they are receiving becomes known.

This sudden shift halfway through the story is unsettling – there’s actually no need for the employer to be found out to be someone quite willing to murder wantonly, and the source of the messages, and the nature of the love interest, are more than enough to up the narrative ante. And the story ends up with (this is intimated from the beginning) the protagonist giving the reader a catch-up of the 75 years since the events in the story took place, offering a very sobering message for a society obsessed with technology….