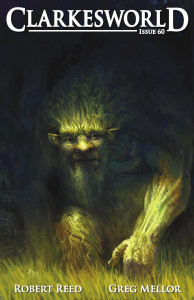 Online : to read and to listen to.

It’s a story where the reader has to decide what is happening and why, as it’s not spelled out by the author. (You have followed the links above and read/listened to it?) Some time hence, a wealthy human living in a remote castle, is visited by a stray dog. Or so it seems, from the first paragraph. Clearly it’s not that straightforward, as the dog can talk. But it’s even more complex than that as a few winks are tipped to us (one of the bitches gives birth, but not to a litter but to a singleton; and, just in case you hadn’t been paying attention, they have fingers not paws).

The conflict for the ‘human’ is how close he allows himself to get to those outside his walls. Will he feed just a few, or more of them? And in a world where physical location is pretty much irrelevant, and where friendships are global but distant, does an insularity from the countryside become more of a problem than anticipated? Just how far can humanity go before they are in effect another species?