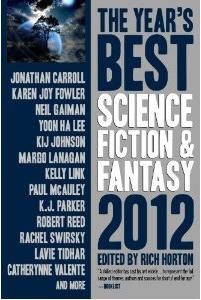 A beautiful story from Swirsky, a classy storyteller. At first sight the setting (an afterlife in which everyone is reunited, with the likes of Napoleon, Marilyn Monroe and Ghandhi making appearances) could be offputting, but this central conceit is used to explore some complicated, flawed characters, notably the newly deceased protagonist, Dennis, a surprise guest at his own post-death party.

We find out about his unfulfilled dreams (neatly listed), his marriage, and his first love (!), and just when you think the story is going to end with a bitter, ulcerated eternity for Dennis, his future opens up (by going back) into a poetic ending.