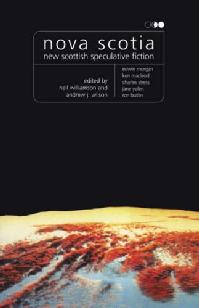 Launched at Worldcon 2005 in Glasgow, this handsome paperback from the Crescent Books imprint of Mercat Press is a showcase of the best speculative writing Scotland has to offer – from Scots and those living in Scotland. After a short preface from the authors, an introduction from David Pringle, and some poetry from Edwin Morgan, the fiction begins:

Ken MacLeod. A Case of Consilience.

A rare piece of short SF from MacLeod who has published a string of well-received novels over the past ten years.

Donald MacIntrye, Minister of the Church of Scotland, finds himself on the ETcetera Station, posted outside the orbit of Neptune, as the discovery of many alien intelligences throws up yet another challenge to Christianty. He sees his presence there as not being simply chance, and in determining whether an underground fungus a hundred metres across is truly and intelligent species, he finds himself up to his ears (and beyond) in bringing the word of God to others.

An excellent start to the volume, with a couple of mentions to SF forebears in their views on the matter in hand, and a story which rather shows up the weakness of the interminable xenolinguist stories we have these days.

A story from a new writer – a Finnish mathematician who specialises in String Theory. Very Charlie Stross in its content and delivery, in a nearish future Scotland when the Rapture of the Nerds unleashes a godplague (volition bonding, recursively self-improving and self-replicating). Jukka, a young Finnish man, and Aileen, are separated by the godplague, but are able to overcome.

If you like Stross you’ll love this (I do and I did). One for Dozois 23rd methinks.

A Scottish factory is downsizing, and we follow Billy through his day, and we see some other perspectives – an older man now past his usefulness, and his wifie. An affectionate story in its own right, looking at the loss of industrial heritage and the prestige (personal and national) which is lost, with the speculative element the fact that the world described, and those therein, is just slightly different to that which we know.

Another new name, the author’s first novel ‘Vellum’ was published this month.

A.J. McIntosh. Not Wisely, But Too Well.

Scottish essayist James Boswell is woken out of his alcoholic stupor by Dr. Johnson, English man of letters, and the erudite pair are at loggerheads during the latter’s visit north of the border. Boswell is pleased to be able to turn the tables on Dr. Johnson by getting him drunk, and the pair then weave their ill-advised way over the misty moors, to prove/disprove the existence of creatures beyond our ken. Boswell is signally pleased to be able to prove to his ertwhile colleague that the faeries of legend do indeed exist. However, the faeries are in fact visitors from space, and the good Doctor’s has to accept the irrational.

The story handles the historical setting well, and makes for a diverting read.

Marion Arnott. Lest We Forget.

A 106-year old man who served in the Great War has been marking the anniversary of the first day of the Battle of the Somme by sitting out at the local War Memorial. He has the misfortune to be attached by local ne’er-do-wells, but it transpires that his old, long-lost, comrades will not allow this to go unpunished…

The horrors of the Somme, and the retribution of those who died in it are effectively in this atmospheric horror story.

Michael Cobley. The Intrigue of the Battered Box.

Quantum escapes in the setting of an Edinburgh which is the capital of the United Kingdom and in which the Americas did not achieve their independence. A Scottish counterpart to Sherlock Holmes has to solve a riddle….

Presumably from the author’s ‘Alternate Britannia’ series, and, as with much Alternate History, extent of enjoyment is reliant on the degree of engagement you have with the central conceit, location and knowldedge of what actually did happen.

Angus McAllister. Running On At Adventures.

A drone-like existence in a confined, claustrophobic environment, following the Ten Objectives of the Journey, suggests that Ewan may well be on a generation starship. However, in railing against his lot he finds his way ‘out’, and ‘out’ is into a small valley, where he finds a small cottage next to a loch, and beings to get an education of the broader world in which he lives through an encyclopedia therein.

However, his taste of freedom and the real world is tantalising, as he is effectively hemmed in by the mountain, and only by crossing the wide loch can he make contact with others. In so doing, he finds himself back on board the ‘ship’, with his horizons once more limited.

Jane Yolen. A Knot of Toads.

Atmospheric horror story set in the 1930s, in which a young woman returns to her remote Scottish home at the death of her father. Virtually estranged from him, this visit re-awakens old memories, and those memories alongside that which her father was investigating, and which brought about his death, which threaten her. Surrounded by ancient crones/toads, and strapped to one of the sails of the nearby windmill (I’ve read enough horror stories to spot that a windmill invariably ends up with someone strapped to it!), she is helped by her neighbours.

A tough of the Harry Potters, in a light entertaining story in which a young woman uses her magical powers to help in office politics (and to get a quick shag).

An altogether darker piece. Anastasia tries to escape the clutched of her dangerous, violent pimp by chancing all with a dark stranger. It transpires that the stranger is very strange – alien in fact, and his being on Earth, to atone for crimes elsewhere, is likely to be more harmful to her health. However, a form of love blooms, and whilst it is a love that is destined to be only short term, it enables her to stand up to her pimp, and free herself of the shackles which have been binding her.

A very entertaining short piece in which a fish who is the daddy of the pond in the municipal park defies almost all the attempts to best it.

Shorter piece detailing rivalries between the Kentigern and St Mungo’s districts in Glasgow (not being that familiar with Glasgow, I’m sure I’m missing something with this one!)

Having saved his soul by making a pact with a watery evil creature, a sailor thinks that he has got one over on the beastie, as in promising his woman in exchange for his life he has got the better of his deal, his wife being dead. However, the year’s pass, and the definition of ‘his woman’ becomes a moot point as his daughter grows up.

A short story in the broadest possible Scottish dialect – too broad for this sassenach.

With the Rajaniemi story earlier in the volume providing Stross-like nerd-rapture, here Stross provides more homely fayre. In the near future with global warming making Scotland perversely much colder, Davy is nursing several grudges in his local bar. A reprensative of the devil turns up, to repay Davy for that which he has suffered, but this canny young man is too clever for him, and is able to come out of the deal much better off. And the poor devil representative has the misfortune to bump into Davy’s knife wielding friend on his way out of the pub.

Entertaining humour in which a bit of unauthorised fiddling with some very hi-tech hi-fi kit leads to a tartanisation of the airwaves.

Neil Williamson. The Bennie and the Bonobo.

One of the lesser known Scottish inventors, George Bennie died in obscurity, his ‘railplane’ invention failing to take off (ouch!) in the 1930s. Here he is visited by a visitor from the/a future, in which his invention has been successful, and which offers him a chance to visit that future.

An American soldier, mentally and physically scarred from his time in Iraq, finally visits his wife’s family in the Highlands. After a fashion. The story starts with vividly portraing the psychological and physical trauma being experienced by Quinn, through the healing effects of Scotland and the magical quality of his visit to the very remote home of his wife, who, having healed him (mentally if not physically) is able to leave him to continue his rehabiliation.

A melancholy, downbeat end to the collection, as far future creatures, presumably descended from humans, eke out an increasingly desperate existence as the sun’s warmth continues to gradually weaken. They head west, seeking warmer climes, but there is only a bleak lonely death awaiting.

An excellent collection which succeeds in maintaining throughout a very Scottish sense of identity. All things that I associate with Scotland are here : single malt, lochs, fitba’, beer, industry, engineering, violence against prostitutes, and humour. Very little tartan, bagpipes and shortbread, which may be the more stereotypical view of what Scotland is all about.

A good mix of SF, alternate history and horror, interspered with some dry humour. It’s a handsome paperback that deserves to do well.