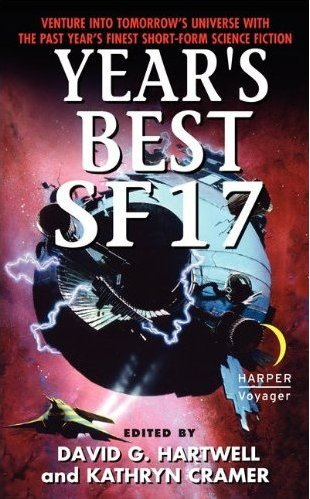 Originally in : Living on Mars.

I didn’t seek out the Young Adult anthology ‘Living on Mars’ that came out last year, whereas I would normally seek out any Strahan anthology. Reason being that I don’t really enjoy reading YA stories, for the same reason I didn’t get beyond p2 of the Harry Potter series – I struggle to engage with stories with young protagonists, addressing issues that tend to revolve around their age (ie issues with parents), and the depth of the stories is perforce not as great as in ‘adult’ fiction. (Leaving aside the issue that I would be expecting young adults to be reading ‘proper science fiction’ not something written down/specially for them, as I was reading Asimov/AC Clark in my early teens).

This story illustrates these issues – an easy enough read, with a plucky teenage in a post-something Earth which has given a small percentage of the population special powers (god save SF from the superhero nonsense the current generation of young adults have had forced on them), and the young female Nigerian protagonist has to use those powers in dealing with a visiting spaceship from Mars.

Having said that, the story is far better than the godawful Prometheus, whose story seemed to be written by someone whose research was getting the scripts from all the past SF films, and who decided in the end to just throw the pages up in the air, assemble them in random order and present that to an undiscerning director. My aunties lived in the same neighbourhood as Ridley Scott in their childhoods, and refer to him affectionately as ‘our Ridley’, although sadly their lives have diverged somewhat since those days in north east England. If they hadn’t I’d have got them to get in touch and giving him a right royal telling off for that shambles of a fillum.