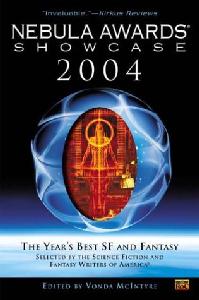 After a short introduction (presumably) from Vonda N McIntyre (there is no accreditation), the fiction begins.

Stories are preceded by author notes, as opposed to an editorial introduction, which adds some value to the presentation of the stories. First up is Richard Chwedyk’s ‘Bronte’s Egg’. Originally in F&SF August 2002 and winner of the Novella category, ahead of ‘Sunday Night Yams at Minnie and Earl’s’ by Adam-Troy Castro (Analog June 2001), ‘The Chief Designer’ by Andy Duncan (Asimovs June 2001), ‘The Political Officer’ by Charles Coleman Finlay (F&SF April 2002) and ‘Magic’s Price’ by Bud Sparhawk.

When ‘Bronte’s Egg’ (and it’s predecessor story) first appeared, I wasn’t one of those charmed by its central conceit:

The second story about ‘toy’ dinosaurs who are living in a refuge, safe from the cruel acts of their previous owners. The main protagonist is a ‘cute’ young Dino, who dreams of the stars, and wants to build a robot. In building said robot, he inadvertently stumbles upon a way of bringing an egg from a fellow resident to hatch. A little too ‘cutesy’ for me, to be honest, as the story veered towards a somewhat saccharin Disneyesque feel.

For me, of the five nominees, the Duncan and the Sparhawk stories edged it.

Next up in the volume is Ted Chiang’s ‘Hell is the Absence of God’ all the way back from Starlight (2001). This won the novelette category ahead of ‘The Pagodas of Ciboure’ by M. Shayne Bell (The Green Man: Tales from the Mythic Forest), ‘The Ferryman’s Wife’ by Richard Bowes (F&SF May 2001), ‘Madonna of the Maquiladora’ by Gregory Frost (Asimovs May 2002), ‘The Days Between’ by Allen Steele (Asimovs March 2001) and ‘Lobsters’ by Charles Stross (Asimovs June 2001).

A worthy winner IMHO, with Chiang showing bodacious audacity in his postulating a world in which there is indeed a God. Whilst His Works are beyond the ken of mortal man, visitations by angels leave none in doubt as to His Powers. The occasional visibility of Hell, below the feet of those still on the mortal plane, is an intringuing one. For Hell is not a fire and brimstone hell, but one simply in which the ‘absence of god’ is the eternal torment. Chiang’s main protagonist, Neil Fisk, is a man who was ambivalent towards God, but who, following the death of his wife in an angelic visitations (such visits can cause miracles as well as result in horrific infirmity and even death) decides that he must seek out God. We get a couple of other perspectives, and in a final, shattering denoument Neil Fisk is finally given a sight of Heaven that truly places the love of god in his heart, but (cruellest of ironies!) for no reason at all (for it is impossible for us to understand God’s motives), he finds himself thrown down to hell, to live in eternity in the absence of both his wife and his God.

After tributes to Damon Knight from several eminent authors, there is a short extract from the winner in the novel categoy, Neil Gaiman’s ‘American Gods’ in which an ancient native American tribe’s journey to a safe place, and the consequent loss of their deity, is described.

Adam Troy Castro’s ‘Sunday Night Yams at Minnie and Earl’s’ (Analog, June 2001) was the runner-up to the Chwedyk story above in the novella category, and gets a reprint here. As with Chwedyk’s dinos, I was left somewhat unmoved in contrast to those who put the story on the shortlist. This is what I wrote way back in 2001 :

An elderly man returns to a tamed, tourist attraction moon, far different to the one he knew some seventy years ago when there as one of the early pioneer developers. He is wanting to revisit Minnie and Earl, who… The early part of the story evokes the potential reality of life on the moon for the early pioneers. Although neatly structured, intertwining the current and the long past, Adam Troy Castro makes what I count as a Cardinal Sin: referring to another SF story (suspension of disbelief disappearing faster than oxygen out of punctured spacesuit helmet). It’s doubly unfortunate in that the story which is referred to has a not-dissimilar plot, and trebly unfortunate in that it is a Ray Bradbury story which led me to ponder that Bradbury would have written this story somewhat more elegantly and concisely. The ending is also cheesily Disneyesque. The lead up to the Big Surprise does generate tension. But the Big Surprise had me puzzled

I also have trouble in recognising this story as one which, according to the promotional blurb “easily qualifies as one of the most unusual and probably controversial stories we’ve (ie Analog) ever published” OK, quite unusual for Analog, but controversial?

As a metaphor for losing our sense of adventure with the sadly lost space programme for cosy commercialism, fine, although the recent space tourist says just as much.

Or am I being obtuse and missing out on something in the story, big time?

I did actually read the story again, and again found the central conceit didn’t push any buttons for me. Maybe, as with Chwedyk, there is an appeal to the stories which works in the US but less so over here in the UK?

A short appreciation by Molly Gloss leads us into an extract form Ursula K. Le Guin’s ‘Changing Planes’ in which UKLG postulates the existing of some far more interesting places to visit, and ones much easier to travel to, than is the case in the common or garden airport.

Jack McDevitt’s ‘Nothing Ever Happens in Rock City’ (Artemis 2001) was a runner-up in the short story category, and is both short and good SF. The local liquour salesman returns from delivering a few bottles of champagne ordered in a hurry by the folks up on the observatory, dangnabbit but what on earth could be worth making such a fuss about?

Megan Lindholm’s ‘Cut’ (Asimovs, May 2001) was a runner-up in the short story category and after reading this in its original appearance I wrote

Body art and freedom of choice conspire to create a fad for female circumcision. A grandmother is horrified when her granddaughter decides to opt for this procedure. A short, but powerful story.

Michael Swanwick’s ‘The Dog Said ‘Bow Wow” (Asimovs, Oct/Nov 2001) was a runner-up in the short story category, and of this story I wrote at the time:

As you will now if you have been reading my reviews for some time, humour in SF is not one of my favourite reading matters – primarily because a lot of SF humour is so rarely funny. Swanwick proves that it can be done, in a wonderfully bizarre/baroque sort of futuristic-steampunk-ishy way. Sir Blackthorpe Ravenscairn de Plus Precieux is an upright, walking, talking dog of some class, who falls in with a rum sort of cove when visiting London. A plot is hatched in which the very heart of the English monarch (a gross, maggot like Queen, symbolising, perhaps….) is threatened. Gads sir, a palpable hit!

Sharon Lee’s appreciation of Katherine Maclean leads into a reprint of a fifty-year old story by here in the shape of ‘Games’ .

Charles Stross’ ‘Lobsters’ (Asimovs June 2001) was a runner-up to Chiang’s aforementioned story, and when it appeared I wrote:

Another treat for me! If you don’t read the UK magazines Interzone and Spectrum SF (and if not, why not?) you may not be aware of Charles Stross. I like his work, and so does Gardner Dozois, who is putting two of his recent stories in his forthcoming Annual Collection. Here we have a high-tech near future story. Not unlike, in some respects, Nancy Kress’s Steamship Soldier on the Information Front, but IMHO much better. It features lots of techie stuff which I like (others won’t), and also features two of my own favourite drinking places in Amsterdam, and kinky sex in which the female takes the lead.

The story shows you can have technology in stories without having to forego characterisation, wit and invention. Did someone mention Analog?

Carol Emshwiller’s ‘Creature’ (F&SF Oct/Nov 2001) was the winner in the Short Story category, ahead of the two aforementioned stories, and also Jeffrey Ford’s ‘Creation’ (F&SF May 2002) and Tim Pratt’s ‘Little Gods’ (Artemins, Summer 2001). When this story first appeared I wrote:

The story is presented as a follow-up to ‘Foster Mother’ in F&SF Feb 2002, a dark, brooding and strange tale of a goatboy. This story is slightly more straightforward – a possibly post-holocaust scenario in which a man living alone in the mountains finds/is found by an enhanced, intelligent lizard/dino. Part of the ongoing battle, the creature is wounded and in need of help.

The volume concludes with the regular listing of previous winners. I can recommend this year’s ‘Showcase’ as being chock full of good stuff – a marked improvement over last year’s issue which didn’t have a whole lot of fiction in it to read.