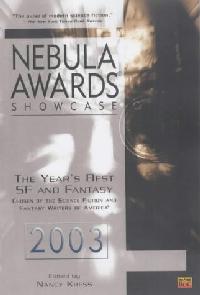 After a short introduction from Kress, the short fiction commences.

Severna Park. The Cure for Everything., the winner in the Best Short Story category, was published on SCI FICTION, way back in June 2000. It is still online here. When reviewing it two year’s ago in Dozois’ 18th Annual collection, I said:

In the forests of Brazil, native Indians are being re-located whilst their forests are being cut down. At one reception camp a truckload of particularly unique individuals in en-route to a different destination. Cut off from outside contact, this community has a genetic mutation in their genes which offers the prospect of them supplying DNA to cure – absolutely everything. But will they have to make a major sacrifice for the good of all?

An albino scientist is caught personally in the horns of a dilemma as one of the group offers her the chance for normal children.

A prime example to me of how the rolling eligibility for the Nebula Award makes the award just a bit silly in today’s Internet age – publishing in print a story which was been online for almost three years?

Jack Williamson. The Ultimate Earth, was winner of the Best Novella Award. Originally published in Analog in December 2000, and when reviewing it then I wrote:

Williamson covers a lot of ground in this tale, from the perspective of a youngster who is one of several young people cloned from long-dead lunar settlers. The earth has eventually recovered from an asteroid impact that all but wiped out life, and the terraformed Earth offers no home to the historical remnants of the old earth. The youngsters however manage to find their way to Earth, into an unsettling theme park which has the feel of late 20th century Disneyland. And Nanorobots have enabled those on Earth to achieve virtual immortality, and the young moon dwellers are seen as a threat. And then a galaxy-threatening plague comes along, and there is this long-estranged brother who has been feared dead, and, and, well all is finally resolved. Phew! The story actually reads quite like a juvenile SF, particularly as it is written from the perspective of a teenager, and also due to the way that potentially enormous plot elements are covered quite briefly.

Kelly Link. Louise’s Ghost. was winner of the Best Novelette Category, and appeared originally in her anthology Stranger Things Happen. I hadn’t read the story until getting this volume, and whilst the story is of a high literary standard, and is populated by some interesting characters (two Louise’s, who between them have a ghost, a daughter who eats and wears only green, a nymphomaniacal passion for cellists) the story isn’t too my mind sufficiently sfnal or speculative/fantastical in its nature to be truly a genre story.

James Patrick Kelly. Undone. a nominee in the Best Novelette Category, was originally in Asimovs, June 2001, and when it appeared I wrote:

Mike Resnick. The Elephants on Neptune was a nominee in the Best Short Story category. Originally in Asimov’s, May 2002, and I reviewed it thus:

The intro to this story refers to Mike Resnick’s ‘chilling new tale’. Hmm, I found it rather amusing, almost a throwback to golden age SF in its feel. Elephants are living on Neptune, and cautiously welcome the representatives of humanity. The men from Earth are somewhat bemused at meeting the elephants, who point out that the treatment that they had meted out by mankind over the centuries was somewhat unjust.

As the two sides parley over a few days, strange things happen.

In addition to the aforementioned short SF, there is a substantial extract from the Best Novel (Catherine Asaro’s ‘The Quantum Rose’), some commentary, and some pomes.

A handsome volume, but in terms of capturing the Year’s Best – not a patch on Dozois, Hartwell or Silverberg.