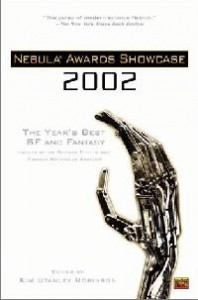 An interesting time dilation effect came with this book. Several weeks after reading the new entry in the annual anthology market, in which Robert Silverberg reviewed the best short SF from 2001, we have a review of the best from 1999/2000!

The book itself caught my eye in the bookshop – a very striking cover indeed. The volume is the same ‘trade’ paperback size as the recent issues have been, although this year the Roc-published volume has a matt cover, and has a slight feel of a galley proof in its finishing (or lack thereof!)

Scroll down and read on..

The volume includes non-fiction in the form of several pages dedicated to the Grand Master Award winner, Philip Jose Farmer, and the Author Emeritus Award, Robert Sheckley. It also includes an excerpt from the award-winner in the novel category, Greg Bear’s ‘Darwin’s Radio’, advertised prominently on the London Underground a while back as a ‘science thriller’.

The Nebula Award Winner in the Novella category was Linda Nagata’s ‘Goddesses’ which was published in the excellent online zine SCIFICTION. Surprising as it may seem, I hadn’t actually read this on-line, and was able to snuggle down on the train an immerse myself in this story. Before I go any further, I should point out that the story is still available here. [UPDATE : no longer available]

‘Goddesses’ has that ‘special something’ that marks out a story of the highest quality. The near-future, hi-tech society is described where necessary to the plot, but not in intrusive detail (as with, say, Charles Stross’s in-your-face hi-tech). The story looks at globalization, and the role of woman, and the role of decision making on a personal level. A separated couple, neither entirely happy with the split that was made some years ago, come into contact again in a project in the Indian sub-continent, in with a Western(Northern) company has taken over the runnning of a failing country. Can the Western employees avoid cultural imperialism and help the sociey to change to prosper economically.

The story has a lyrical feel to it in the early stages, somewhat losing this as the tale unfolds. A young girl, married young, widowed young, and infected with AIDS, would appear to have little time left in the society. She forces some decisions to be made, and is rescued by a small-scale economic initiative that is helping to redress gender imbalance in the society.

All in all, an excellent story, beating the following for the award: Andy Duncan’s ‘Fortitude’, Lethem/Kelly/Kessel’s ‘Ninety Percent of Everything’, Mike Resnick’s ‘Hunting the Snark’, Lucius Shepard’s ‘Crocodile Rock’ and Walter Jon Williams’ ‘Argonautica’.

The winner in the Novellete category was Walter Jon William’s ‘Daddy’s World’ which I read a while back and noted succinctly that it was an ‘extremely scary vision of VR, with parents choosing to keep their children perpetually in the oh-so-cute stage’. This is included in the volume of course, as are two runner’s up. One of these is Eleanor Arnason’s ‘Stellar Harvest’, the story in which location scout Lydia Duluth was introduced. The story is fine as far as it goes, but it does suffer by being read alongside the much more intense and deep Nagata story. Duluth visits a planet, scouting for the entertainment company Stellar Harvest. It all feels very 20thC!

Another runner-up is Gardner Dozois’ ‘A Knight of Ghosts and Shadows’ (the title at the top of each page has had the K omitted!). This is another high-quality story, which I reviewed a while back.

Winner in the shorty-story category was Terry Bisson’s ‘macs’, a short, telling ‘story’ about families of victims of the Oklahoma bombing being given the opportunity to reach closure (a good social work term!) by wreaking their revenge on DNA clones of the bomber.

This excellent story is included, alhtough sadly no space has been found for the other contenders in this category, viz: Jeffrey Ford’s ‘The Fantasy Writer’s Assistant’, Ellen Klages ‘Flying over Water’, Severna Park’s ‘The Golem’, Michael Swanwick’s ‘Scherzo with Tyrannosaur’, and Pat York ‘You Wandered Off Like a Foolish Child to Break Your Heart and Mine’.

The volume also includes nine short author perspective on SF and the future, all the more compelling for being written shortly after September 11th (one notably as the news was coming through).

A nice volume to own – make sure that the nice white cover doesn’t get dirty though!