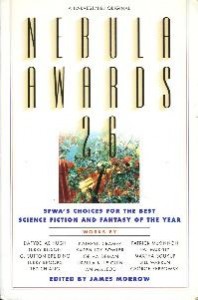 Kathryn Cramer sets the volume off with ‘ “Democrazy”, the Marketplace, and the American Way: Remarks on the Year 1990 in Science Fiction’, the title of which leads off with reference to Daffyd ab Hugh’s story later in the volume. She reviews the year, and the notable fiction, primarily the Nebula stories herein enclosed.

First up, is Ursula K Le Guin’s ‘The Shobies Story’ is a very interesting and complex story. In effect, Le Guin shows how the ‘soft SF’ for which she is justly revered can take on ‘hard SF’, in utilising a sociologically-powered FTL drive. The ‘Churten Drive’ is difficult to nail down in strictly (hard) scientific terms, as it relies on a consensus amongst the crew in order to work. The crew who are testing the drive do find that it works – they get from A to B quiet instanteneously (or perhaps Ansibly would be a better term). But the fascinating (and stressful) aspect of the journey is that each has perceived is in somewhat different terms, and whilst their individual perception of the journey is different, when taken as a whole, the journey has been successful.

A story that boggles the mind, and requires re-reading, which IMHO is a virtual pre-requisite for a truly good SF story. The story lost out to Ted Chiang’s ‘Tower of Babylon’ in the novelette category.

Terry Bisson’s ‘Bears Discover Fire’ is a deceptive story, a worthy winner of the Best Short Story category (and the matching Hugo). The protagonist, has to deal with the passing of his elderly mother at the same time as our furry friends do indeed discover the benefits. The losing of the link to his mother, alongside the burgeoning of intelligence in the bears is touchingly crafted, and the story burrows under the skin somewhat like a nasty little tick you’d pick up in them thar woods.

Best Novelette went to Ted Chiang’s ‘Tower of Babylon’, a classy piece from an author who doesn’t write much, but when he does, makes it worth the wait. Here we follow Hillalum, a young miner who has joined the decades-long attempt to build a tower to reach Heaven. Chiang conjures up an intensely believable sense of place and time (some two millenia or more ago), to the extent that there is little objection by the reader to the point at which those labouring up the tower actually get so high that they pass the sun and the stars and are soon looking down on them.

Pat Murphy’s ‘Love and Sex Among the Invertebrates’ was a runner up in the short story category, and features a radiation-riddled scientist who uses the few days left to fashion biological robots to take humanity’s place in the world we are about the depart.

A runner-up in the novelette category, Ian Macleod’s ‘1/72nd Scale’ is interesting in retrospect, as it is Macleod’s first professional sale. The august members of SFWA obviously spotted a future SF talent, although the story by itself, a claustrophobic psychologicall horror, has no SFnal elements whatsoever. A young boy, his family wracked by the death of his elder brother, finds himself trying to make a plastic scale model in an attempt to live up to his sibling’s achievements, but finds that things go horribly wrong.

Karen Joy Fowler’s ‘Lieserl’ is an inventive short piece, in which Albert Einstein comes face to face with relativity through letters from his wife, describing their baby – the letters come one after the other in subsequent deliveries, but he has to keep up with a life that is running on a different timerate to his own.

The movies of 1990 are reviewed by Bill Murray in ‘Spiders, Scissors and Schwarzenneger’ (I have to report that my 12-year old is an avid Terminator/Arnie fan!)

Martha Soukoup ‘Over the Long Haul’ provides a painful view into the world of a teenage single mother in the relatively near future. In order to keep herself and her two children in receipt of benefits, Shawana Mooney has to ride pillion in an articulated lorry. The cab is actually controlled remotely, as the tech is in place for one man (and it is always a man) to control several lorries at once. But health and safety rules require a person on board, and who better to put in those cabs than those who can otherwise make little contribution to society. Shawana feels that her luck may be in, as she meets a very handsome young guy at a restaurant. However, all is not as it seems, and she has to show a resourcefulness she did not know she had, to save herself and her children.

In the novelette category, Dafydd ab Hugh’s ‘The Coon Rolled Down and Ruptured His Larniks, A Squeezed Novel by Mr. Skunk’ provides a very singular story. Humanity has unwittingly unleashed on the planet a virus which enables other species to attain intelligence and language, and which brings humanity ‘down’ to the level of the animals. The narrator, Mr Skunk, is told of a small enclave of human’s living in a protected environment on the other side of town, and with a motley crew of fellow animals, and a young boy, they make the dangerous trek to rid the world of these remnants of the world before ‘Democrazy’.

The final story in the collection is Joe Haldeman’s ‘The Hemingway Hoax’, joint winner in the Novella category. As with ‘The Shobies Story’ this is a complex story, which repays re-readings. There are complicated levels within the story, and a fascinating relationship between the protagonist and Haldeman himself, in their ‘Nam experiences.

A worthy winner of the award (and the matching Hugo), the only problem for me is that it is such a good take on quantum alternate realities as to make other stories in this sub-genre look decidely weak. The story : a Hemingway scholar is approached by a con-man, who hatches a plan to ‘discover’ some lost works of Hemingway and to pass them off as real. They will of course have been created by the scholar himself.

However, as the story unfolds, the sfnal kicks in, big time, as the scholar is approached by a being from the future, with the power of life and death, who urges him not to complete the forgery. The reason – the publication of the forgery will re-ignite interest in Hemingway, and the leaders of the USA and USSR will be Hemingway fans, and when their countries reach crisis point, the cojones overcome the grey matter, and all hell breaks loose.

Ignoring this plea, the Hemingway scholar is despatched by the creature from the future. But, instead of dying, he finds himself in another Earth, slightly different. He struggles with the decision he has to make, and each time he chooses to continue he finds his death leads him to another Earth, slightly more different. until in a dizzying, helter-skelter finish the nature of who he is and what he is doing comes to a dramatic conclusion.

Interestingly, the introduction makes mention of the work that Gardner Dozois did in making Haldeman’s work appear in novella format – a longer version duly appeared in novel format.

This volume packs in a lot.