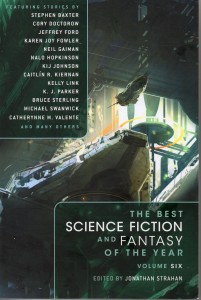 Originally on : Tor.com and still there.

Deceptively clever little story from Swanwick, as you might expect. It’s still online so take 20-30 minutes to read it, it won’t be time wasted.

The story initially suggests a traditional bucolic fantasy setting, as young Linnea has to flee her parents cottage, and is sent by them to her grandma’s house, with a rucksack and a map. Except that, as we find out quickly, it’s a talking rucksack and a map, and the rural idyll is not pre-industrial development, but quick some time after it. And whilst meeting a man/troll, and there being a battle between two beautiful spirit queens would also suggest more traditional fantasy, what goes on beneath (literally) is full-on SF.

I realise I haven’t read as much short SF from Swanwick of late, and shall have to determine whether that is down to him not writing it much these days (Editor’s! Hassle Unca Mike for short fiction!) or me not looking in the right places.