Matthew Kressel. The History Within Us. (Clarkesworld Magazine, #42, March 2010) 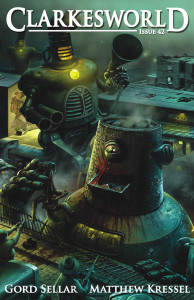 There are several things I like about my new Hyundai i30. The diesl 1.6crdi engine is far more economical than the Renault Megane. It’s got a sunroof. I’ts got a five-year unlimited mileage warranty, which is good if you’re doing 30,000 miles a year in it (which the Megane was -so- not up to doing). And it’s black and if I close my eyes and squint, I can convince myself it’s either a BMW 118, or an Audi A3.

OK, so you’re wondering WTF? Well, the i30 also has an iPod socket, and you can plug your iPhone/iTouch into it, and you can browse the music/podcasts on it. And when you’re stuck in one of the regular jams on the M25 motorway (it’s called the London ‘orbital’ but it is the most un-orbiting kind of thing you can imagine) it came as a pleasant surprise that amongst my Velvet Underground/Stooges/Clash and motley collection of punk/new wave, I found lurking a load of podcasts from Clarkesworld that I’d put on there and forgotten about.

So the other day I listened to Kate Baker reading Matthew Kressel’s ‘The History Within Us’, which was published in March 2010. Obviously the sensible thing for you to do is to leave Best SF (what, a website encouraging you to leave it??) and either listen to the podcast
here or read the story here. You’ll be reading it one of the Year’s Best Anthologies next year.

So, what’s good about it? Well, Kate Baker’s reading is top class. Her reading of Kij Johnson’s ‘Spar’ was similarly affecting, getting into the emotional mindset of the female protagonist in that story, as she does this one. Kressel has gone far into the future, but cleverly retained a humanity that we recognise. As you’ll see in the early paragraphs of the story, the protagonist is watching an ancient piece of film of her ancestors, which enables us to make an emotional link with her. Humanity has done more though than simply archive film, it has embedded ancestral memories into DNA. That is, until the end of time at which this story starts. There is a choice to be made, as perhaps the last human has to flee this universe, escape with many others through a black hole event horizon, hoping to escape the terrors unwittingly unleashed by humans, who are cleansing this universe, and who have made humanity pariahs across the universe.

There are choices to be made by the human, and the very alien aliens, with even the aliens showing a compassion that perhaps we don’t justify.

It’s a great listen, and probably a great read. Rather than read it myself on screen, as I spend way too much time in front of a screen as it is, I’ll be hoping to read it an about 12 months when it’s anthologised. And top marks to Clarkesworld for some of their fiction in 2010. Am I glad I stopped reading Analog to make way for reading other sources more suited to being hailed as ‘best sf’.