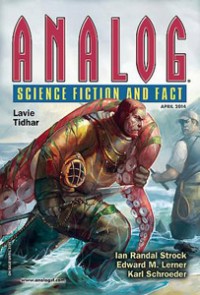 Until earlier today I was of the opinion that Eric Stone’s ‘That Leviathan, Whom Thou Hast Made’ (Analog, September 2010) was probably enough for my lifetime in terms of stories about space whales and religion. I was remarkably unmoved by that story, and somewhat bewildered by its Hugo-nomination and Nebula Award Winning status.

But here comes another author, Lavie Tidhar, who provides a hugely entertaining, tongue firmly in cheek story about space whales, Mormons, Jews, and Scientologists. In fact he gives the Mormons very short shrift, and the Scientologists no shrift at all.

Said space whales have arrived on Earth, and are petitioning (not in a nice way) the leader of the civilised world, the President of the USA, as they wish to be converted. They are ambivalent as to what religion.

It’s a clever piece of meta-fiction by Tidhar (sadly my literary vocabulary isn’t up to giving it full justice) as there is lot within the story that pokes fun at the SF writing community, and there are references to several SF books (and some quite pointed references) that are quite delicious.

So my bet is that this one short from Analog that will be knocking at the doors of the editors of the Year’s Best anthologies. And it’s better than the Leviathan space whale story by a factor of 10. (I’m rubbish at maths, but I think that’s about the right scale).

More about this issue of Analog here, and previous issues reviews here.