Feb 19, 2016Leave a Comment on Jeff Wayne’s ‘The War of the Worlds’ at The Dominion TheatreIndividual Stories, Reviews

H.G. Wells’ ‘The War of the Worlds’ has been with me 40 years, and Jeff Wayne’s musical version just three years less. I’ve still got the 1975 paperback version of Wells’ novel that I bought, and safely tucked away in the loft is the double-LP album I bought when it came out in 1978.

I can easily close my eyes and take myself to the front room of our house in Hartlepool in 1978, picture the settee, the sideboard, the coffee table my cousin made, the big record player I bought with my first paycheck that summer. And I can also remember sitting listening to the album, Richard Burton’s mellifluous tones as the narrator, the ululation of the tripods, and being blown away by it.

Truth be told, as I was getting into punk a big way, the singers (Justin Hayward, Phil Lynott, David Essex) weren’t quite my cup of the tea, but my love for SF pushed those concerns away.

The album was a huge success, and has maintained a good profile over the years, and it has been taken on big stadium tours by Jeff Wayne, with big back projection of video and CGI to take the story forward, and even with Liam Neeson in holographic 3D on the stage (an earlier version evidently had an actor made up to look like and lipsyncing to original narrator Richard Burton). 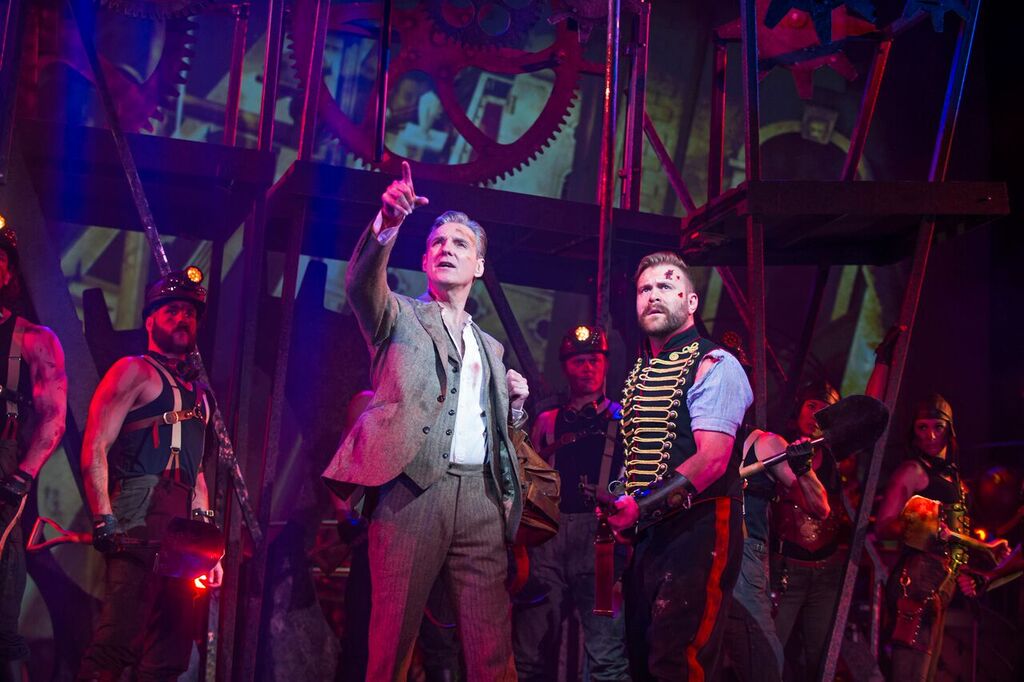 This stage version is produced by no less than Bill Kenwright, and is promoted as having been ‘reimagined and brought to spectacular theatrical life for its world stage premiere’. Truth be told, based on a peek at YouTube at the big arena performances, what we have is a version that is downsized for a theatre, but with additional staging elements, rather than being properly ‘reimagined’.

As with the previous arena performances, there was a big screen at the back of the stage, with some excellent CGI, archive film footage, and artwork. In front of this were the band, the orchestra, and Jeff Wayne himself, conducting.

The ‘Black Smoke Band’ gave a flawless rendition of the soundtrack, and the massed ranks of strings in the ‘ULLAdubULLA’ orchestra added richness and depth to the score. These two units were on platforms, with a separate one for Jeff Wayne, which moved smoothly towards the front of the stage when it was otherwise empty, and to the back of the stage when there was action on stage. And there was a diaphanous front screen dropped down at times, enabling further projection, which gave the impression of 3D at times, when the digital images on the rear screen synced with the front screen.

In looking at staging, let’s get a couple of quibbles out of the way first. 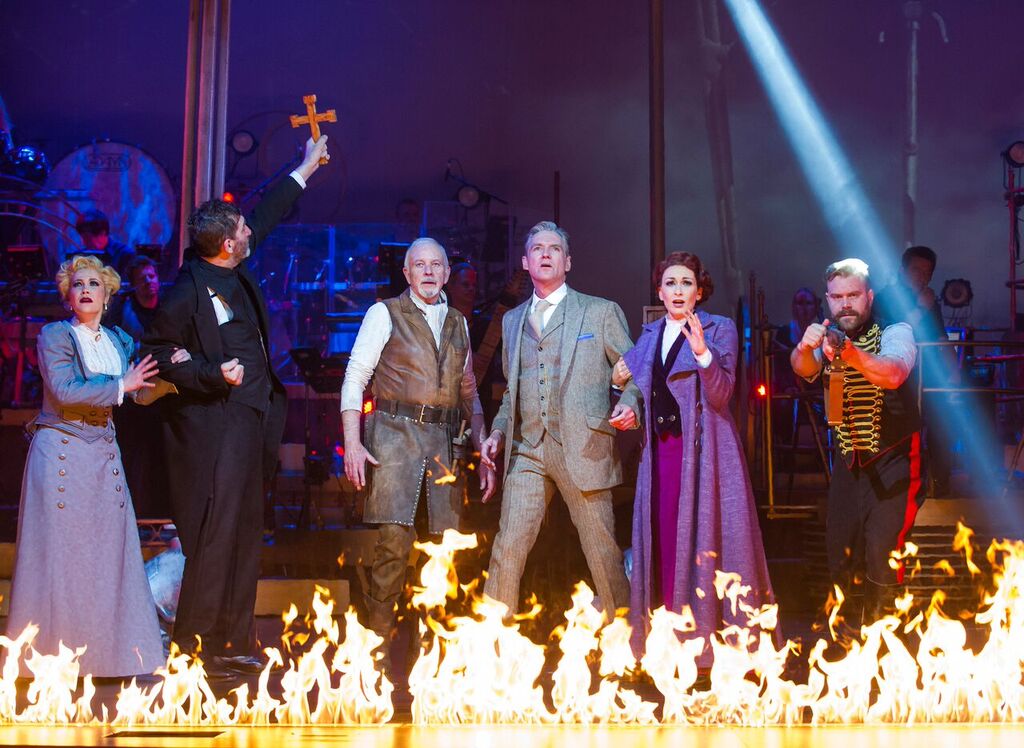 Staging ‘The War of the Worlds’ is a tricky one to approach, with theatre audiences now expecting some very clever stage trickery. In recent years I’ve been captivated by being persuaded that we were watching live horses and and a cavalry charge in WWI being mowed down by machine guns (‘War Horse’), by seeing Fagin’s Den in the bowels of London (‘Oliver Twist’), Frankenstein’s monster appearing from nowhere (Danny Boyle’s ‘Frankenstein’), a body being buried (‘Grapes of Wrath’), a car flying out over the stage (‘Chitty Chitty Bang Bang’), someone having all four limbs chopped off (‘Monty Python and the Holy Grail’), and more.

You can do a lot of clever stuff with mechanics, sleight of hand, distraction and the like. But how do you manage an HG Wells Martian tripod that is bigger than a house?? Not, I would suggest, as this show does, have one moving centre stage in a sideways, crablike motion, walking like a Thunderbirds puppet – you can see that it isn’t supporting it’s own weight and is suspended from above. I have to admit, my first reaction when seeing it was to suppress a laugh.

And another bit of the staging – seeing the unscrewing lid on Horsell Common, and having the Martian’s head appear, didn’t really work fr me – the alien head on stage was singularly unimpressive, especially as the large screen at the back of the stage was showing a writhing, pulsating Martian head. The first half of the show did have a fair bit of milling around on Horsell Common, lots of flashing lights, a clever sychronisation of the heat ray on the back screen and the one on the stage and real flames at the front of the stage. We were in Row L and could feel the heat from them on our faces – those seated in Row A must have been toasted!!

The second half of the show was stronger, and better for having less of the tripod and more old-fashioned theatrical staging. There was a memorable scene with the narrator making his way through the red weed-covered landscape, with dancers in red, fronded costumes, contorting themselves around the stage floor. And when the narrator has a troubled night’s sleep, we see the characters peopling his dreams whirling around him and his head, preventing any attempt to escape the sleep. And The Artilleryman’s song was very well supported by dancers enacting the digging out of his vision of a subterranean future. 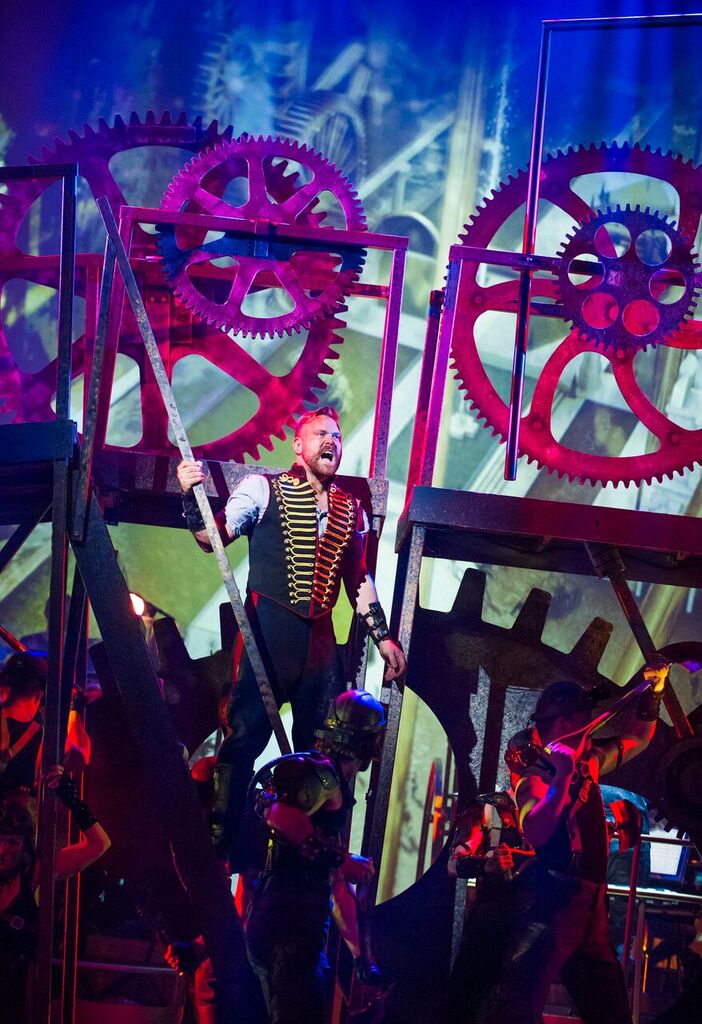 The casting had some Big Names – some of the same vintage as the original LP. David Essex, the artilleryman in the LP, got the biggest applause of the evening, although his singing opportunities were relatively limited (was there ever a thought in Wayne’s mind to include Essex’s 70s hit ‘Hold Me Close, Don’t Let Me Go?’ into the soundtrack?)

Jimmy Nail (‘Auf Weidersehn, Pet’, ‘Crocodile Shoes’, ‘Spender’ and much more), put a lot into his scene as the parson who has an existential crisis of faith – with shades of ‘Yosser Hughes’ (an 80s reference) stary-eyed madness, although his singing ‘style’ is quite a bit different to that of Phil Lynott in the original album.

Michael Praed (‘Robin Hood’ in the 80s and evidently lots since if you’re a theatre-goer!) was the journalist/narrator on stage, who handled the singing and acting well. For the younger audience members Daniel Bedingfield as The Artilleryman gave it all in his big song, reaching some very high notes!

Heidi Range, evidently a singer from an all-girl pop band called ‘Sugarbabes’, and Madalena Alberto (Evita, Piaf, Grizabella), played the two female leads admirably, but without the opportunity of a big set piece that most of the male leads had.

And of course, there was/wasn’t Liam Neeson, who had been in holographic 3D on stage in the arena performances, evidently interacting with those on stage. But he was in ‘reduced circumstances’ here as a projected video on screens which dropped down in various places on the stage. He projected the words of HG Wells in strong fashion, (importantly, as they are a key element to the story) – to the extent that it would probably be fairer to promote the show as ‘Jeff Wayne’s Musical Version of HG Wells’ The War of the Worlds’ to give old Herbert George his due reward (and to stop anyone booking tickets for a stage version of the Tom Cruse movie version).

Unlike most West End shows, this one ends on quite a low-key note, as the narrator walks through deserted London, pondering what has happened, and what it means for humanity. There’s the quick NASA epilogue, and then the theatre announcer has to in effect announce that the show is over, as he introduces the cast.

And a final mention of a neat touch : the programme has a two-page reproduction of a review of the original album, the review written by one David Gerrold (who waxes lyrical), taken from ‘Galileo Magazine of Science Fiction, 13 July 1979’

I have a feeling this is going to be a Marmite show. You will either love it or hate it. We certainly heard people, as we were leaving the theatre, who were clearly in both camps. One lady had been waiting for 10 years to see this on stage, and it clearly had moved her. If you know and like the album, then it has to be a no-brainer. I’d be tempted to go again and close my eyes, just to concentrate on listening to the live music. If you’re not that familiar with the album, and want a traditional West End show then you’re probably better off spending your pennies elsewhere! For me, who has fond memories of the album from 40 years ago it was a good (not great) night out, probably a 4 out of 5.

What we really need, though, is a properly ‘re-imagined’ version by Jeff Wayne. Something that stays true to the story in tone, but is written from the start with a 2hour stage show in mind.

Feb 19, 2016Leave a Comment on Jeff Wayne’s ‘The War of the Worlds’ at The Dominion TheatreIndividual Stories, Reviews