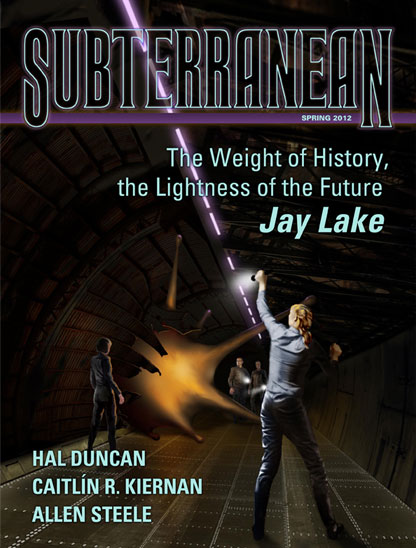 Jay Lake has been writing stories in his ‘Sunspin’ setting for some years now, and this is another significant entry in the can(n)on. If you’re not familiar with these stories, and you like your Space Opera, then I’d suggest before going any further you read a couple of predecessor stories that are online, namely ‘Permanent Fatal Errors’ (which appeared in the DAW Anthology ‘Is Anybody Out There?’ and which co-editor Marty Halpern has on his blog; and ‘To Raise a Mutinty Betwixt Yourselves’ which first appeared in the Dozois/Strahan anthology ‘New Space Opera 2’ (and which is available on … Best SF Presents!).

The story in hand is on Subterranean Online, so you should read it there before progressing any further, to avoid any spoilers (although what follows will try to avoid spoilers).

This story features The Before Michaela Cannon, who was the main protagonist in ‘To Raise a Mutiny..’ (and doubtless other stories I’ve yet to get my hands on), only several hundred years later. ‘The Before’ refers to her status as an enhanced, virtually immortal human, one of only a few, and fewer still since ‘The Mistake’ some centuries ago. This story has revelations about the nature of The Mistake, alongside the usual ship AI (not always to be trusted, Dave), and some real humans. The Weight of History in the title is that which is felt by The Before Michaela Cannon, as she looks back on an increasingly long past, and the relationships that she has had, and decisions made. There’s tension, and more decisions to be made, and costs to be weighed and paid.

Call me old-fashioned, but I do like my Space Opera to be drip-fed, rather than gorging myself on a several hundred page Peter F. Hamilton novel. Especially when its as good as this. Having said that, FFS will some publisher sign him up to a novel deal! If not a 10 book 1mGBP deal like Alastair Reynolds, I’m sure he’d settle for a 3 book .3mUSD deal ;-)