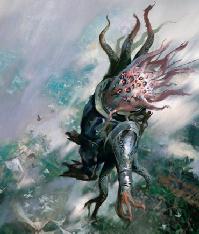 Announced in 2010 as having been chosen by Gardner Dozois for his 28th Annual Collection in 2011, and hence my reading it (mind you, I’d normally read Jay Lake stories anyhow). The superb illustration by Martiniere and Manchess, accurately and beautifully complements the eloquent description of the alien who falls to Earth at the beginning of the story:

“Tumbled out of the autumn sky over the Cole Valley neighborhood of San Francisco like a maple seed, spinning with his arms stretched wide and his mouth open in a teakettle shriek audible from the Ghost Fleet in Suisun Bay all the way down to the grubby streets of San Jose.”

n.b. The Man Who Fell to Earth is referenced in the story. It’s from the ‘less is more’ school of story-telling, leaving the reader to fill in, or at least, to ponder the blanks. The alien doesn’t say much, but what he says has impact. Short in the reading, likely to be long in the memory.