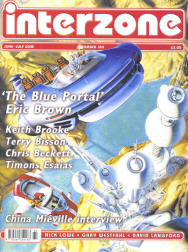 The publishers are at pains to point out that whilst this issue is dated ‘June/July’ this does not mean that Interzone is now publishing bi-monthly, but rather that they are trying to catch up on slippage on production. By cunning maniupulation of the space-time continuum, they are now endeavouring to have their magazine appear in the month for which is dated. This will be an improvement on have to wait until September for the ‘August’ issue, but still is out of kilter with publication practice elsewhere, where we see the US magazines December festive issues appearing in October!

The issue starts with a lengthy first instalment of a story by Interzone stalwart Brown. I shall read it in one go when the next issue appears, and report back.

Esaias appears for the second month running. His ‘Osmund Considers’ was a charming tale, and this is quite nice in its own way, although perhaps not quite as effective. In a futuristic milieu, chess is played out by mercenary pieces, and a young clerk has to take the responsibility of purchasing a pawn for one of the major players.

Another UK stalwart, with a short tale in which a young couple dream of working on Mars. The young woman is succesful in her application, her partner not so. Will he be willing to accept being an AI construct in a vehicle as being an alternative to being there himself? Does he have any choice in the matter?

A script of a short play which features a wheelchair-bound Hugo Nominee. A mini Tales of the Unexpected episode, with the unexpected element for me being why Interzone published it. Wait for the film.

Chris Beckett. To Become a Warrior.

Another UK stalwart, with Interzone regular Beckett returning us once more to Thurston Fields estate in his near future welfare state series. A thoroughly unlikeable working class sort (so unlikeable as to put you off the story!) has the chance of attaining a manly godhood (me, I’d prefer a godly manhood) and all he has to do is despatch the now-retired social worker Cyril Burkitt whom has featured in previous stories.

The Eric Brown serialisation leaves little in the way of content, and the 3 UK B’s (Brown/Beckett/Brooke) give a slightly parochial feel to the issue.