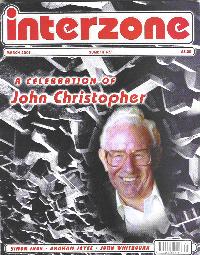 A John Christopher tribute, the main character referring to Christopher’s ‘Death of Grass’ and pondering how animals can change their behaviours to respond to changes in the environment, whereas higher animals like mankind can personally struggle to make necessary changes.

A widower, struggling to come to terms with his wife’s death, meets, whilst on a voyage, an elderly lady who has developed a strategy to overcome a similar loss, but one which threatens her. Can the perceived betrayal felt by her long-deceased fiancee lead to revenge from beyond the grave?

A neat story in which the answer if of course, yes, but as to the how?

The City in the Dusk. Matt Colborn.

The hot streets of the city call to a couple holidaying there. Vampiric, half human dragonflies threaten to steal more than blood.

Under the Overlight. Nigel Brown.

A most strange setting – floating, semi-biological habitats, in which humans roam intestinal passages harvesting energy and food. Young Jak comes to understand the nature of the continuing struggle to survive, and the future role for him.

The Hills Are Alive. John Whitbourn.

The rolling hills of Sussex, and a small rural pub near Lewes. An offer is made to a hiker – which future will he choose?

Many of us dream of aliens arriving on Earth. But what if they have been on Earth for a long time, and in leaving, take with them something that we miss terribly?

The lengthy and excellent interview with Christopher restricts the space for fiction, but in fitting in six stories they are all by necessity quite short. With three having a contemporary English setting there is a bit of a samey feeling, and in six months time readers of the stories may well struggle to remember which story was which. But worth the cover price for the interview alone.