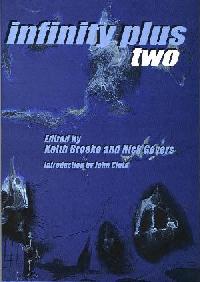 PS Publishing have been publishing chapbooks since 2000, going from strength to strength, on the basis of the increasing volume of high quality output from the Leeds-based publisher. There is obviously a market for signed publications, even at the relatively high prices they charge.

A good case in point is this volume, the second anthology chosen by Brooke/Gevers, who are behind the excellent InfinityPlus website. Like the first volume, this hardback contains a dozen or so stories by big names, with signatures for each author in handsome plates at the beginning of the book, which costs a not insubstantial 45 UK pounds.

Roberts takes us back to the world of Jonathon Swift’s ‘Gulliver’, envisioning a Britain in which Lilliputians are put to work as virtual slaves, and the Brobdingnagians are suffering xenocide.

Abraham Bates is one of a small minority opposed to the use of the Lilliputians as slaves, engraged that people in God’s image are so enslaved – for did not God make black people for this purpose?

Having confronted the owner of a factory employing said Lilliputians, in which Roberts portays the dialogue in a most convincing manner, Bates finds his world turned upside down as France and Rome have declared them on the side of the Brobdingnagians and Lilliputians (the talking horses are seen as beyond the pale). And as such Bates finds himself morally and politically aligned with France. With the Brobdingnagians in the employ of the French army, who have the services of one Mr Babbage, the French army is about to attack London itself!

Bates finds himself on a mission to aid the foreign forces, and in due course finds himself with the victorious generals. But his triumph is as ashes in his mouth.

In the future which McDonald paints, nano-tech is in place from the very first (in utero in fact) and everyone has a close relationship with the nanotech-AI that is forever with them.

But young men in their twenties, a period of life which will last a thousand years, still have the same interests, and passions, and the protagonist is miffed when his AI insists he spends the night downloading his memory, as opposed to shagging the babelicious Angel he encountered during his cycle tour of a Dakota under the threat of fire.

Having to go without is the least of his problems when he wakes, totally alone and disconnected from the electronic, digital world. Although his AI, Sistor, returns she is in a depleted state and he is mightily unimpressed at the thought of walking 30k to get help. He ignores Sistor’s pleadings to take a particular route, and comes across …. his charred remains.

The fairy tale of Rapunzel – in which we learn more about how Rapunzel ended up in her solitary tower-dwelling predicament, and what actually happened after being rescued. Grimm.

When I read this originally I wrote:

Michael Moorcock. Cheering for the Rockets.
Originally in Interzone, November 1998

A short piece in which Moorcock plays tribute to writer Philip Wylie, whose fiction included SF, and whose non-fiction is quoted liberally throughout this Jerry Cornelious ‘story’. Wylie coined the phrase ‘momism’ for the sentimentalism and the over-simplication which he felt would be the ruin of American democracy, and Moorcock/Cornelius bemoans America’s rise to the status of an Imperial Power in this dyspeptic overview of war and hate.

A near future Britain in which a strange mutation means that some babies are born as … vampires. Most are taken away at birth to orphanages, where they live their short lives hidden from the rest of society.

Ruth, a mother of two teenage girls, has been living along for a while (her husband walked out on her). Finding an abandoned baby, a vampire baby, the obvious thing to do is to surrender it to the authorities. But for a variety of reasons, she keeps the baby, ‘nursing’ it with her own blood.

But of course it all has to end in tears, and Ruth ends up without the baby, and without one of her daughters who, in a panic at finding herself pregnant, jumps off a high building.

A mightily impressive story, considering it is 30 years old! It could easily be slipped into an issue of any SF mag today and presented as a new story, which is the more impressive as it relies on computer technology and genmod.

Lais has escaped from ‘The Institute’, a place where where children with a genetic mutation which gives them genius at the expense of longevity, are raised. In a world in which disease and ageing are virtually not known, Lais and her fellows are used for scientific research, and even whilst on the streets, on the run, Lais is able to analyse data to the point where she identifies a future disaster for society.

Having been writing the odd story for the best part of a decade (many collected in ‘Toast’, it was a couple of stories in Spectrum SF which started his recent high-profile. A cheesy pun at the end of the story spoilt what was otherwise a neat little story of intrigue and information markets.

An imprisoned writer/academic, imprisoned by the court and by his own writing, receives a couple of manuscripts from someone masquerading as a student. This political spy is now churning our writing describing from different perspectives and milieus a scenario, at the conclusion of which the mystery is resolved.

Deep in the Amazonian jungle, one of the last unexplored habitats is being finally explored. However, not all is as it seems. The husband/wife/son team who are leading the way down the deep, steeply-sided ravine/rift, know more that they are letting on. There are mysterious things which have until recently been hidden from human view….

Brown has written a series of stories against the setting of the planet Tartarus, a planet doomed by its sun going supernova. In this story love leads a man to follow his wife to Tartarus, and there he is gradually sucked into a situation which ends with both he and his wife being ritualistically mutilated in a ceremony intended to hold back the nova.

I had a strange sense of deja vue, as Brown’s ‘The Ultimate Sacrife’, Spectrum SF 4, has essentially the same plot, ending with a sister watching her brother making a similar, futile, sacrifice.

There have been a number of stories of late about retribution, the capital penalty and ‘closure’ of late (notably Bisson’s own ‘macs’).

Here the human rights legislation leads a condemned man to seek to save his immortal soul by being crucified as a means of being despatched. In a black, black story, all around him come out well from this decision, except for the poor victim. Except..

Lucius Shepard. The Arcevoala.
Originally in The Magazine of Fantasy & Science Fiction, October 1986

Along with the McIntyre story, the only other story published more than a couple of years ago. Very much classic Shepard, in the steaming jungle setting. Some hundred years hence, in the afterman of war, the Amazonian jungle is a mysterious, magical place, and a young man is created by the jungle, the better to defend itself against humanity. The man is tasked with entering the world of man, and this he does.

A nice volume to have on the shelves, with a wide range of quality content which showcases a wide range of SF, and high production values. The high price and limited print run will restrict the volume to collectors, but as the stories aren’t originals, we can’t complain that the average SF reader is being deprived.