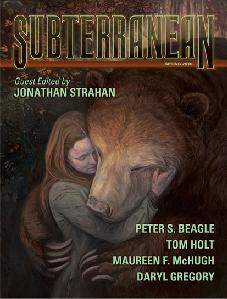 Announced in Dec 2010 as appearing in Gardner Dozois’ 28th Annual Collection in 2011., still online on the Subterranean website, so read the story if you haven’t already.

Living in the arctic wilderness of Finland, with only a talking bear to keep him company, is a young man who forsake the option to upload. When visited by a digital, partial substantiation of his ex-wife, some ghosts of the past are awakened, and in taking up a request to help those who are no longer earthbound, he enters a strange city, under the thrall of the plague gods, and there is a reunion.

Well written, lyrical and elegaic in its own right. My only beef with Rajaniemi is that he’s gone to writing successful novels way too quickly, and we’ll likely see less short SF from him than we would selfishly like to see!