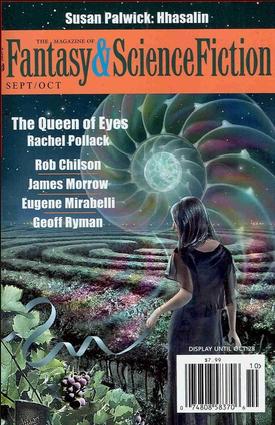 A recently widowed woman, having lived in the shadow of her brilliant husband for many years, has trouble adjusting to the new situation, especially with an ex-colleague sniffing around. And especially with that colleague being an ‘accelerated Canid’ – to use the Brin term, and uplifted dog.

It’s a shorter story, and there are more questions raised than answered, especially for me, as there is way too little information about the dog, Professor Sam. He’s called Professor Sam not because that would be a cute name for a dog, but because he’s got academic tenure. He’s evidently got dog eyes (tiny bits of white to the side), and he’s evidently got a rough tongue. But we don’t know if he’s got a wet nose, or walks upright (probably, as there is mention of hands, rather than paws). And, evidently not neutered, as he’s go the hots for the widow (is that a pink lipstick in your pocket or are you just pleased to see me?) which she initially rejects, but a midnight jilloff suggests not.

There’s an inconclusive ending to what is a bit of a frustrating read!