Chiang : Hell is the Absence of God 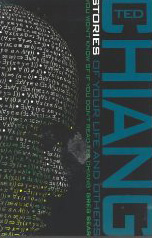 Being stationary for 30 minutes on the motorway is not great fun at the best of times. When you spent 3.5hrs getting to the office in the morning, and you realise that you’re going to be over 3hrs getting back home, it can be a real pain. However, the pain can be lessened if you have to hand the Apple itouch you bought a couple of weeks back, and have on it a few of the books and stories you purchased a while back from Fictionwise, when you were in the habit of reading online on your old Tapwave Zodiac handheld gizmo.

And 30 minutes was just about time for re-reading Ted Chiang’s ‘Hell is the Absence of God’, which was origially published in the Starlight collection back in 2001. The novelette won a Nebula, and so appeared in Nebula Awards Showcase 2004, and also in Dozois’ 19th Annual Collection.  When I reviewed the story back then I wrote :

A worthy winner IMHO, with Chiang showing bodacious audacity in his postulating a world in which there is indeed a God. Whilst His Works are beyond the ken of mortal man, visitations by angels leave none in doubt as to His Powers. The occasional visibility of Hell, below the feet of those still on the mortal plane, is an intringuing one. For Hell is not a fire and brimstone hell, but one simply in which the ‘absence of god’ is the eternal torment (although many in hell seem to be quite happy with their situation). Chiang’s main protagonist, Neil Fisk, is a man who was ambivalent towards God, but who, following the death of his wife in an angelic visitations (such visits can cause miracles as well as result in horrific infirmity and even death) decides that he must seek out God. We get a couple of other perspectives, and in a final, shattering denoument Neil Fisk is finally given a sight of Heaven that truly places the love of god in his heart, but (cruellest of ironies!) for no reason at all (for it is impossible for us to understand God’s motives), he finds himself thrown down to hell, to live in eternity in the absence of both his wife and his God.

A worthy winner IMHO, with Chiang showing bodacious audacity in his postulating a world in which there is indeed a God.

And re-reading the story some years later is a joy. The complex, changing relationships of the three characters with God, and the ways in which society engages with a visible godhood whose actions are seemingly unknowable, and who as a result can seem to be a crueal and an unjust god, gets the grey matter working.

Chiang isn’t a prolific writer, which is fine by me, as his standard is scarily high. If you haven’t already got a copy of his collection ‘Stories of Your Life and other stories’, I would seek one out. Amazon.com just has a few expensive used copies, whereas there are a few copies left at amazon.co.uk (one less than there was 5 minutes ago, as I’ve ordered a copy – I hadn’t bought a copy originally as I have all the stories in their first magazine appearance, but realise that not having a copy of this anthology in my collection is indeed a mortal sin!)

And with the itouch populated with some other stories, more will come – I can almost look forward to the next traffic queue on the M25! No, only joking! – just in case the God of Motorway Congestion is reading this…