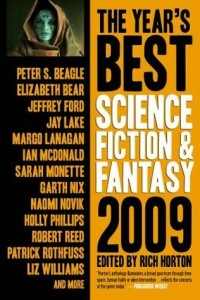 A very clever and well wrought tale set in the Royal Court of Eireann. The Princess Royal’s eye is taken by a young inventor summoned to the King’s chambers, who demonstrates – up to a point – a machine that can send something forward in time. Not everyone is convinced, but the King has faith in the inventor, and the Princess’ fancy is very much taken. She follows his efforts over the years ahead, the struggles he faces, and the struggles she faces when she ascends the throne. And the denouement, in which the effect of the time travel on the reality she has known to that point, which is irrevocably, but subtly changed, works well. It is the subtle and ambiguous nature of the ending, rather than a heavy-handed seismic shift in the politics or the social structures of the world which often happens in such stories, that works well, rounding off a classy piece of writing.