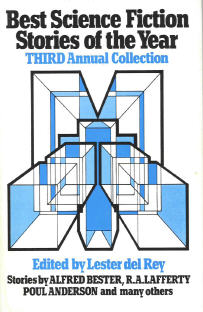 A satellite with a technical problem after launch is given a jolt in order to make it work properly. The electrical surge has a more dramatic effect.

The USA is reduced to selling historic sites for hard cash to the Japanese. One collector has an eye for the unusual.

Castle Cloud sits on a mountain, where each night mistfall brings tales of demons, and tourists. But can the planet withstand the scientific exploration seeking to identify whether anything lurks in the mist?

What secrets does Pluto hold?

Thomas N. Scortia. Thou Good and Faithful.
Originally in : Two Views of Wonder

Berrigan’s World, following his death, has a faithful population. But their willingness to help makes life rough for them. Rough. Rough.

An android visits the bereaved family of a spacer killed in an accident.

Michael Kurland. Think Only This of Me.
Originally in : Galaxy November 1973

Against a backdrop of VR/pseudo-historical theme parks, an elderly longevity enhanced man meets a much younger genmod woman who is more than she seems.

Robert F. Young. Ghosts.
Originally in : Worlds of If, February 1973

Sensitive tale of Jenny and Jim who live on after their creator passes away.

Poul Anderson. The Problem of Pain.
Originally in : Fantasy and Science Fiction, February 1973

A Christian reviews his faith following his experiences with another race in which he loses his love.

Kate Wilhelm. Whatever Happened to the Olmecs?
Originally in : Fantasy & Science Fiction, October 1973

A scientist comes across evidence that challenges him to take desperate measures.