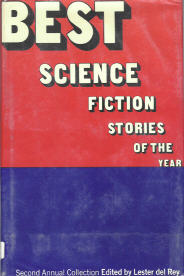 Robert Silverberg. When We Went to See the End of the World.
Originally in : Universe 2

James Tipree Jr. The Man Who Walked Home.
Originally in : Amazing, May 1972

A deceptive story about a time travel experiment which goes badly, badly wrong, with enormous implications for humanity. It spans several centuries of post-holocaust, bookended by John Delgano’s desperate attempt to get home. The contrast of the intense personal struggle of Delgano and that of the survivors of the holocaust gives the story a big impact.