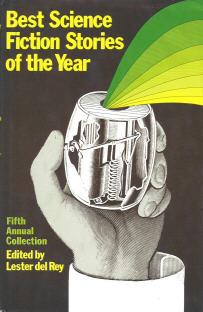 The spaceship Uriel and its crew are doomed to wander space, untouchable. The Absolute Christian Church and its tenets are obstacles which the wife of one on board the ship has to overcome to meet her husband for one last time. Candidate for the least-surprising denouement in short SF.

Short which ponders the inverse relationship between delivery time and distance for the mail.

An Alien symbiote attempts to gain a foothold on the planet Earth.

Sole survivor of AI armada returns to Earth, but is not greeted as the all-conquering hero. Helbent Four struggles to be recognised.

Having been raised alone in a habitat by robots, a change in circumstances gives Willie and opportunity to understand what has been happening, and a challenge.

Liz Hufford. The Book Learners.
Originally in : Magazine of Fantasy and Science Fiction, May 1975.

An alien race take the teachings of the bible somewhat too literally – particularly for those who put themselves forward for prophethood.

Stranded on Earth, the use of the financial markets proves a means of escape.

Bleak view on the downside of longevity.

Excellent blending of fantasy and hard -SF. A peddler turns out to be much more than that, and the rural idyll similarly deceptive.