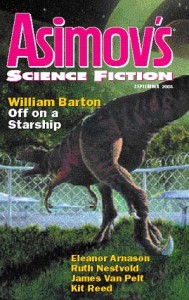 Anthropological and xeno-linguistic SF are probably to Asimovs what Scientist SF is to Analog, and there is a danger in using these softer sciences to set up a puzzle which needs solving in the same way as Scientist Fiction uses physics or chemistry to set up a similar conundrum.

Ursula K Le Guin’s anthropological SF stands above the crowd as she goes into complex society building, and doesn’t feel the need to have a puzzle-plot to take the story along.

Nestvold’s society building is interesting without being outstanding. The society she describes, in which there are strict secregations between the sexes, no obvious written language, and cultural niceties which are difficult to unpick, isn’t that different to some you find find on Earth now.

Dr Toni Donato arrives on the planet called Christmas as a senior linguist, intrigued by the challenge of a society with different languages for men and women. However she is baulked immediately by the leader of the on-planet team, Dr. Repnik, who has a problem with her joining the team.

Donato has to fathom his resistance to her presence alongside the challenge of communicating with the women in the society. And she has to resist the temptation of a particularly attractive native.

She manages to solve both problems, with Dr Repnik’s come-uppance particularly enjoyable (albeit with his character being a little unlikely).

A good story which just about gets the balance right, avoiding having too much linguistic jargon.

Very reminiscent of ‘James Tiptree Jr’s’ ‘The Man Who Walked Home’. In that classis short from the 70s the story of Earth’s recovery from nuclear winter is intertwined with the time-travelling scientists who triggered the nuclear event trying to struggle back to his own time.

Here van Pelt sets up the story with an unusually downbeat section. With nuclear armageddon underway a team at Mission Control are desperate to live those few minutes more to see the space Advent make the leap from our space to another space. Can humanity make that leap and survive? Sadly the final moments of those at Mission Control see the experimental spaceship fail disastrously, with the ship making the jump but those on board evidently left floating in deep space.

There can’t be many more downbeat beginnings to a story!

There are then a couple of scenes, generation by generation, in which humanity’s recovery from the nuclear winter is seen. Once the stars can be seen again we have something to aim for. But will we be a backward looking race, or one which looks to the future.

Intertwined with those scenes are intriguing glimpses of a consensual consciousness formed from those on the Advent, whose noncorporeal intelligence is able to penetrate deep into space before returning.

And as with the aforementioned Tiptree, the reader is left wanting more.

A pointed look at celebrity and TV soaps. A young woman has an opportunity to leave her mundane existence to become part of a focus group which will steer a TV soap, the characters and the actors within it.

The blurring between reality and fiction is subtly handled.

For my money the challenge to humanity is not to avoid nuclear armageddon, but to avoid the dumbing down of our race. Instead of looking to the stars we’re getting more and more insular and we’ll end up far up our own VR backsides.

This story grabbed me far more than Arnsason’s recent stories (‘Knapsack Poems’ and ‘The Potter of Bones’).

It’s a far more inventive, bodacious story than those. Godhood in the shape of a human female (the Big Ugly Mama of the title) is striding through deep space, as such gods are wont to do, when she accidentally puts the wind up a Zk who is stranded in space. Visual stimulus is the means by which the Zk move from life-stage to life-stage, and the visual stimulus she provides is such that the Zk goes back a life stage. In order to put right what she has done (for she is a fair god) she takes the Zk to Earth’s prehistory to enable him to return to the life-cycle he should be in.

An entertaining take on creation mythology.

Shortish short which whizzed over my head like a cruise missile over its target. Heisenberg is in Heidelburg, and appears to have little choice in the direction of his life, rocket building for der Fuhrer. I think. I’m more than a little uncertain.

William Barton. Off on a Starship.

Barton doesn’t write a huge amount – or at least not much in the major US markets, but what he writes is invariably very well worth reading – most notably in recent years ‘The Engine of Desire’ (Asimovs Aug 02) and ‘Heart of Glass’ (Asimvos Jan 00).

Those were dark stories of a humanity constrained to the solar system, whereas ‘Off on a Starship’ is his story of what SF was like before the darker side of life is revealed to the teenage SF reader.

An SF collection that laughs in the face of the New Weird. An excellent issue.