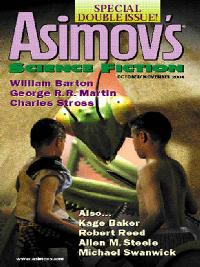 The penultimate Accelerando series, in which Manfred Mancx finally makes a corporeal return, and those who have kept that status and stayed at home find out about the true nature of Meiko the cat, and themselves (Manfred and Pamela’s breakup somewhat more complex than they had though), and they appear set to live without interference of said cat. Which leaves for the final installment those versions of themselves who headed out to pastures new in earlier stories, and the instance of Manfred created by Meiko to test a message purporting to be from them. Wowza.

A v-e-r-y clever story, possibly too clever as many readers may see this as simply an Alternate History, featuring philosopher Albert Camus, in a world where the French invention of the N-Ray has them throwing their weight around on a global scale, with their culture steamrolling its way across the world. (The N-Ray is called thus on account of having been developed in the french town of Nancy – thus being a Nancy Ray-Gun).

Camus is given the opportunity to prevent the assassination of the French President by a visitor for the future, leaving him with a philosophical conundrum which will be spotted by those familiar to Camus’s work through either Philosophy 101 or via The Cure’s ‘Killing an Arab’. I have to admit my knowledge came via that latter route, nb The Cure have featured previously in Paul Di Filippo’s work (‘Doing the Unstuck’ F&SF May 2001).

William Barton. Though I Sang in My Chains in the Sea.

Barton has provided some extremely strong stories in Asimovs in recent years. ‘Heart of Glass’ (Jan 2000) and its successors provide a very dark view of a near-future with humanity constrained in the solar system turning their attention to itself in terms of genmod engineering and cyborgisation of ‘lower forms’ of life. ‘Off on a Starship’ (Sept 2003) has been rightly hailed in many quarters as a classic.

You’re probably thinking I’m now going to say of this story, But… But I’m not….

He keeps up the standard with this memorable story, similar to ‘Off on a Starship’ in that he pays homage to the past – to ‘Richard Matheson’s ‘Incredible Shrinking Man’. In an obviously reflective mood, Barton begins with a painful picture of a young teenage boy in the mid 60s, whose dad has left home, and who is finding his mother increasingly difficult. The kid escapes through SF, Ace Doubles and the like.

His coming of age happens somewhat differently though – he (and the rest of humanity) wake up to find themselves shrunk to doll size. Suddenly his whole universe shrinks down to the neighbourhood in which he lives. As in Matheson’s tale, the shrinking continues, and young Win teams up with his friend Mark and Mark’s dad, whose ingenuity and driving force keeps the trio alive (not Mark’s mom though).

As they continue to shrink, waking up each day significantly smaller, young Win finds himself growing as a person, whilst Mark slowly diminishes and Mark’s dad suddenly reaches a point when he is totally at a loss.

And then? And then Mark wakes up again, and Barton finishes with a bravura twist and flourish. You could argue that the story should have finished a la Matheson, with a final? shrinking leading to an uncertain future. But Barton in effect changes the story at the end – you weren’t really reading a straightforward retro horror/SF story at all, but a subtly more complex story about childhood, adolescence, and (strangely enough) about growing up (not down). A shoo-in for the Year’s Best anthologies.

Another in ‘The Company’ series. I read this one for a change, partly as it was shorter than many, and wasn’t focussed on Dr Zeus operatives in historical settings. Here the operatives are trying to intercept one of the earliest guinea-pigs of the cyborgisation process – a young boy who would have been killed in a car crash, but who was saved and given the chance to become an immortal cyborg. However, the young boy’s treatment is far from a success, leaving him a bitter individual. Worse still, a bitter individual with a capacity to hop around time much more easily than others. The operatives do finally meet up with him, on his return to the scene of the fatal accident, caused by him wanting to return to the simpler days of his childhood.

A hi-tech ‘tec story. Daniel Fry if a virtual PI. Virtual on account of being flung off a balcony by his wife. His AI PI self is visited, in true PI fashion by a babe, who gets under his skin. Actually, worse than than, she tampers with him in such a way that even his virtual presence is threatened. This on account of his ex-wife, having flung him off the balcony, is now having a fling with this woman, and she is finding even his noncorporeal presence a distraction.

Robert Reed. A Change of Mind.

Reed has some fun with the use of meme-transfers – the use of tech to instantly upload knowledge. Someone appears to be moving across the US infiltrating communities and leaving them with unwanted, but not particularly harmful, new skills and beliefs. A journo is brought in and has to work out who is behind these X-Filesy incidents. Turns out that she is closer to to the answer than she thinks/remembers.

A young guy, horribly burnt as a child, finds himself suprisingly chosen for some very hi-tech surgery, which will actually re-grown his face. The specialist shows him how his face would have turned out had he not been burnt, and welcomes him into his flat to rehabiliate. But it turns out that the specialist has a hidden agenda, trying to recreate his own son, lost in an accident some years ago. Having received the medical treatment, Eric has to decide whether he is willing to take on that burden.

Chris Beckett. We Could Be Sisters.

Another in Beckett’s tales of quantum-Earth-hoppers – in this case a young woman who is living a very privileged existence in a near future London in which the haves are segregated from the have-nots, stumbles across another existence of herself, for whom life has been somewhat harder. Welcoming her alter-ego into her life, in Eliza Doolittle style, she is disappointed to find that her other self remains true to form and takes advantage of her.

A single page short, very 50s in its feel, about a scientist who develops a boon to humanity which turns out to be less then boonish to himself.

Michael Swanwick. The Word That Sings the Scythe.

Dozois’ #21 collected Swanwick’s ‘King Dragon’ which would otherwise have remained beknownst to all but the members of the Science Fiction Book Club whence it originally appeared, and for that we should be grateful. We should also be grateful for this, an immediate followup to that story. Will has left the village, following his role in supporting a crash-landed dragon, who has ruled said village for some weeks, and here we have a broader canvas on which Swanwick continues to impress with his imagination. Set in a oddly different near future Earth, in which tech and magicke are combined, Will meets a young girl, who is more than she seems, and some very feisty and immodest female centaurs (heaven knows what naughtiness would have occured had the story been written by Di Filippo!). A particarly memorable scene is one in which a huge explosion, which we have been warned about turns out to presage the appearance of two truly colossal warriors, whose slow-motion battle, heads above the clouds, is vivid.

A short story in which a young girl and her grandfather row out into a lake, and the girl finds out the sacrifices made by the denizens of the planet on which they have settled, and the role of humans in their heroic, but ultimately doomed, loyal support.

Penultimate in the second ‘Coyote’ sequence, in which, erm, the good guys beat the bad guys, who mostly get their just desserts, and in which one of the good guys makes the ultimate, noble, sacrifice as the planet is returned to the original settlers.

A strong issue which showcases the very best in SF.