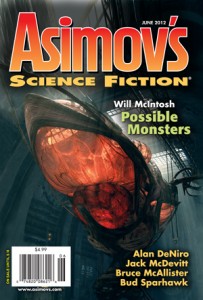 Nicely told story through the eyes of a dude in a relationship with a woman who decides she needs some Vietnamese black chickens for her garden. But the reason for needing them is quite unusual, and the story builds to a gnarly life and death struggle in a bedroom with an elderly Viet buddhist clad in only red boxing shorts defending the Earth from alien invasion. And that’s not something I’ve come across before in 40 years reading SF.

Having appeared on Best SF through stories in Interzone to date, Rivera now finds himself appearing in the esteemed Asimovs, with a quality story that looks at faith and religion and how it is impacted by First Contact. The story progresses through the viewpoint of a young woman who has lost a lot (everything in fact) and for whom a pilgrimage might offer a fitting end to her life.

Flashbacks fill in a lot of detail, painful detail for her, and the story/flashbacks become staccato as tension is raised until she teeters on an edge, having to make a decision. Which is where the story started…

Lovely, gentle story that looks at some very big questions. The story doesn’t give any answers, but the three generations of women, two widowed, one very special clock, make maths and determinism and a whole lot more enjoyable and human than is generally the case!

Having now checked up, I see that the only other story I’ve read by Wallace I noted as ‘lovingly crafted’, so looks like this new writer has got what it takes…

A ‘story’ that is bound to appear in at least one of the 4 year’s best anthologies next year.

It’s in the format of a multiple-choice exam paper, deliciously and excoriatingly providing an autopsy on a human relationship, alien invasion, and much more. There’s a lot more creativity and humanity than I was expecting at the outset, considering the structure of the story- in fact, much more than you get in a lot of narrative story telling.

Jack McDevitt. Waiting at the Altar.

Out in hyperspace a trainee pilot has to react when her spaceship comes tumbling out of hyperspace. Is it a real incident, or a Kobayashi Maru training scenario? There’s a long-distance emergency call from a craft that must be long-dead – what will the crew (Simmons, Trelawney and Kobayashi) of that ship be able to posthumously provide in terms of what went wrong.

In fact, the long-dead celebrity Simmons points them to a rendezvous, long-missed, with someone wanting to talk…

Having failed to make it as a baseball pro, Cooper heads back to his home town, to the empty house of his deceased parents, dreading the life that awaits him. Except that he finds that the house isn’t empty – there’s a very alien presence in there, and through it he begins to get some perspective on what we has lost, hasn’t lost, and what he might get back again.

A nice realistic tone to the issues faced by the protagonist, and his reaction to them.

As I’ve mentioned before, now that it’s only a few months away from 40 years since I entered my teens, I’m not the hugest fan of stories featuring young adults and their coming of age woes. Call me a miserable old git if you like. My wife does.

DeNiro sets up deep space travel through a human/alien symbiosis, with young human pilots linking telepathically with alien ‘shepherds’ to fly through hyperspace. The story revolves around teenage concerns and relationships – exacerbated by some gender issues that make it a bit more complicated. There’s a bitter pang of failure and loss at the end, which helps, as opposed to an upbeat ending.

Excellent issue with every story a strong one.