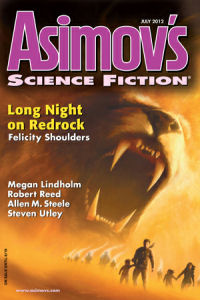 She sets the story in the USA about 50 years from now, the protagonist a teen daughter of a strict single mother, who live in social housing along with her brother. The US is in a bit of an economic downturn, but cleverly the story enables us to contrast this with the struggles the mother had in the 2030s. And not only is there the relationship between the girl and her brother and their mother, but also the historic relationship between their mother and her grandfather.

All of this is explored through the death of the estranged grandfather, who leaves, along with a very modest sum of money, a vintage car. Of course the car is hi-tech by our standards, with an impressive AI, but is hardly state of the art to the teens.

Taking the car back to their house, the story explores the impact the car (a station wagon) has on the family, and throws a light on the reliance of AI controlled cars, the various relationships, live and historic, and ends quite happily ever after, up to a point, in a tender and affecting way. Sort of a nod to the Disney/Pixar Toy Story and Cars, with a bit of Wall-E thrown in. And Herbie.

Robert Reed. The Girl in the Park.

The editorial introduction explains how the recent discovery of 2010 TK7 gave Steele the missing piece of a puzzle for his ‘Near Space’ series. If I was being cruel I’d say that that jigsaw was tucked away in the attic, and for good reason…

The Near Space series is, according to Wikipedia a series of novels from the 1990s. This lengthy story suffers in comparison to the previous story I’ve just read, Catherynne M. Valente’s ‘Silently and Very Fast’, an inventive, rich, deep etc story. This feels more like a Reader’s Digest condensation of an Analog novella.

‘Show, don’t tell’ is advice given about writing fiction, but here it is mostly tell, as the protagonist, responsible for the PR for a billionaire, describes in great detail the history of their relationship, and the lengthy trip to the asteroid made by said billionaire. The billionaire is eccentric – he wears dark turtleneck sweaters and is a vegetarian (remind you of anyone?) and reclusive (obsessive about cleanliness, ditto?). And as in two other Steele stories I’ve read, the question of sanity and ‘madness’ appears again.

Tender love story across the decades with a strong ornithological bent, a bird with knees bent in the opposite direction, and a minimal sfnal bent.

A husband and wife ex-marine team farming on a remote planet, have to deal with dark memories as they try to rescue their kidnapped children, following the kidnapper across a nightmare-inducing desert storm.

In addition to both husband and wife being revisited by nightmarish combat decisions from their past, the kidnapper, and the two kidnapped children also face horrors from their dreams, and this reader got a little disorientated what with the husband and wife watching their younger selves, and keeping track of who was watching and who was the memory!

A good issue, with Lindholm and Reed the pick for me.