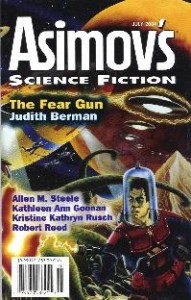 Sixth intallment of the ‘Coyote Rising’ serial, in which a long schelp across the continent leads to a co-incidental chance encounter, and a long schlep back to square one.

Short, lyrical tale built on an interesting conceit of time/space travellers using dinos/trees to build themselves a future on the planet Earth, and a young girl who has the ability to tune in to the beautiful music of the calculus-embedded creatures from prehistory.

I criticised the previous issue of Asimovs for having three stories in dialog/diary format, and Reed furnishes us with one side of a transcript of an electronic coversation. However, I can forgive reed on accout of a) he writes so much fiction that he’s entitled to use the format once in a while b) he does it well.

The conversation leaks out snippets of information in a way that can often only work in this format, and we find a near-future Earth constrained by nasty germies (Reed describes them more technically), and the story revolves around the placement of a young girl in a day care facility. The sealed nature of the facility should protect the girl, but she has also to be protected from her overprotective father, and we have to work out who has her best interests at heart. A clever piece.

Some ancient, fossiled wood stumps make their regular, if rare, appearance on a beach at a very low tide, and some very old magic is found by two young girls in the neighbourhood. Rusch builds up the suspense with two believable, clearly different young girls.

Eliot Fintushel. Gwendolyn is Happy to Serve You.

A gonzo yarn of a strange couple – he a professor and she a waitress. But that ain’t the strangest this about their relationship, for whilst they are at opposite ends of the social stratum, they have something uncommon in common.

I got increasingly frustrated as this story progressed and the number of unread pages left to the end of the book began to diminish – I wanted the story to go on longer! It is a full 33-page novelette, but this feeling is partly engendered by the fact that it is structured like a 600+ page novel, with the story progressing via a series of short sections from the perspective of a number of characters, rather than a single PoV. It was also engendered by the story getting its hooks into me.

The story itself is an intriguing one – the Earth is fighting against alien invasion, and we see this through a rural township in the USA, which has a downed alien spaceship on its outskirts. This has enabled them to salvage a lot of alien hi-tech, but the remaining aliens regularly threaten them with incursions which are made worse by one bit of alien hi-tech, the Fear Guns of the title, which put mortal fear into those in their way.

The story edges closes the the X-Filesy, but what also marks it out is the characterisation, with Berman going beyond the generally stereotypical two dimensional characters in many an action SF story to get into the minds of several complicated people, all of them with their own fears, which the alien invasion have highlighted, rather than being the cause of the fears. The conclusion is a doozy, with the exact nature of the Fear Gun highlighting what Bearman has been demonstrating throughout, that human interactions and relationships are frequently driver by power and fear and hate.

Certainly a notable notch above the opening story!

A strong issue (and a cool retro cover!)