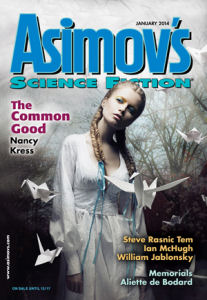 Nice cover from Gromovataya/Shutterstock.com – what about the fiction?

Part of de Bodard’s ‘Xuya’ series of stories, although one not part of the excellent recent spaceship-set stories, but ‘also somewhere in the 22nd Century but in another corner of space altogether’ according to her timeline.

The story revolves around Cam, a young girl struggling with the pressures of familial piety amongst her community who who have fled from a terrible pogrom, a lover who is pregnant, and a ‘job’ the she hates but sees not way out of. She is perhaps guilty of betrayal of her elders, appropriating memory chips of aged ones who choose not to upload, but selling on those memories for profit. There is the usual mannered exchanges between generations, bot real and virtual, but a policewoman who is suddenly on to her causes Cam to review her options, and she finds out that she wasn’t on top of things quite as well as she should be.

Hopefully there’ll be more in this timeline, and I’ll remember enough about it when it comes by! Nice BTW to have a story with purely female characters, thus avoiding any need to have plot driven by hairy-arsed testosterone!

Collins uses prime numbers to run as a thread throughout a clever multi-character story. At first the various characters appear to be unlinked, but then the threads are drawn together in a story that could equally be placed in a horror or crime magazine.

The main protagonist is one Jersey Jones, a young guy working in the tech field who works out how he can intercept and programme the advertising and related neural feeds into people – something allowed for advertisers at only a low level. With one young woman auto-defenestrated due to him not quite fine tuning his programming, a number of characters come together in a story that for reminded me of the Coen brothers films Barton Fink/Blood Simple, and The Matrix. And that’s a good thing!

An early twenties no-account version of Carl is surprised to find a version of himself from two decades in the future on his doorstep. His future self has come back in time to warn him of his actions. If this wasn’t bad enough, another Carl turns up. And another. And another. You get the idea…

A lightweight course to cleanse the palate during a multi-course repast.

A disappointing story from Kress. It’s a YA story with a teenage protagonist, and it fairly breezes through in traditional YA style. Not only is young Zed (incorrectly called Zack in one paragraph!) a teen and therefore in need of having a lot of stuff spelt out to him, but he’s from the backwoods, so is even less aware of what is happening, so the reader of the story can have everything laid out quite simply.

What is happening is potentially interesting, but not ground-breaking. Aliens have invaded Earth and are living in domes (some 40 years since I read John Christopher’s tripods trilogy with this setup!). That invasion was supported by them turning up in orbit and removing all of humanity’s major urban capitals (with an ability to do so at the click of a virtual finger – the YA story enables things like this to happen without any question). And the crux of the story is an ethical dilemma, which is clearly spelt out – the aliens say they did this to save humanity from itself (due to climate change and overpopulation). So what this suffering of a lot of people worth it for the greater good of humanity as a whole.

And young Zack, as is oft the case, is a special young man, and is able to ‘far-see’ which enables him to solve some conundrums, and set humanity free from the yoke of its oppressors. For better or worse.

So if you’re a teacher of 12/13 year olds and want a story for them to read to address issues of climate change, then this is the story for you. But I wouldn’t personally see it as a story for Asimovs.

Interestingly this story is by way of a follow-up to ‘A Kindness of Strangers’ in Lou Anders’ ‘Fast Forward 2′ from 2008 (review here), which I noted was ‘Classic Kress’. Now that story had an adult protagonist, and the quick summary I provided then suggests that story featured adult concerns and actions, rather than teen concerns and actions.